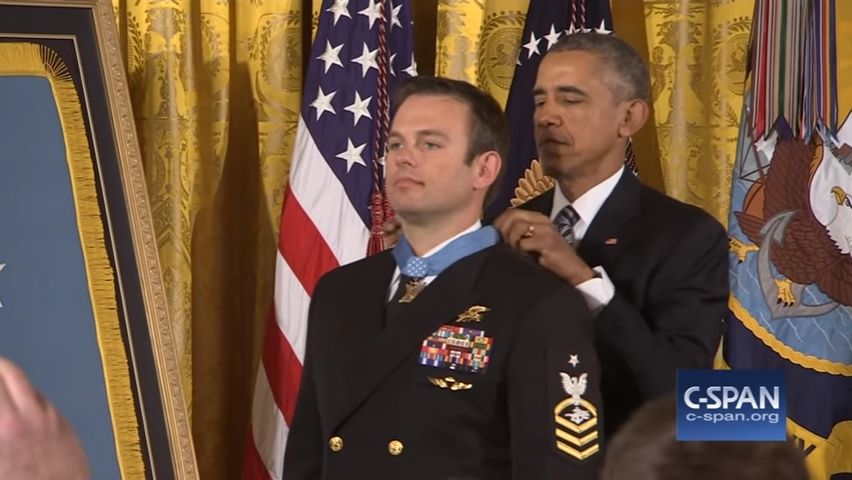 Afghanistan -- When an American doctor had been captured by the Taliban, Chief Special Warfare Operator Byers and his SEAL Team Six unit came to the rescue. After Byers entered the house, he immediately tackled a shadowy figure inside and pinned him against the wall, even while throwing himself on top of the doctor to protect him. 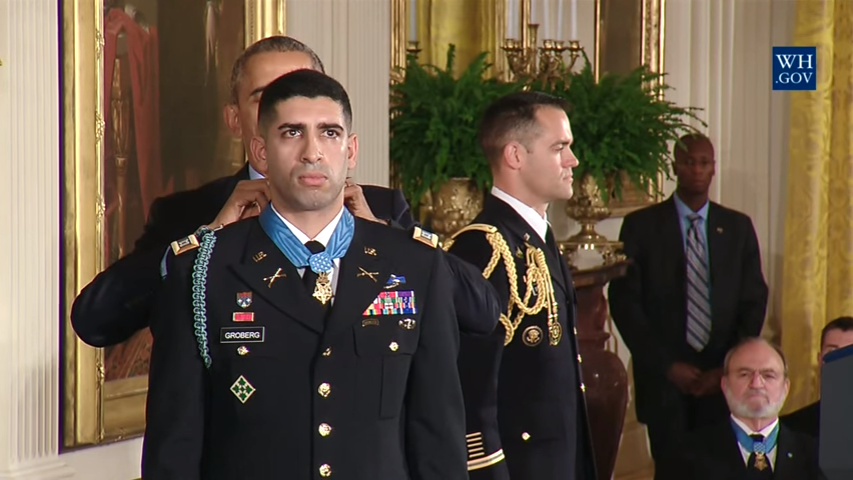 Afghanistan -- After his patrol passed two men on motorcycles crossing a bridge, Captain Groberg knew something was wrong when the men began to backpedal toward his squad. When a suspicious figure began walking in their direction, Groberg tackled him – he was a suicide bomber. The soldier’s quick action saved lives, although it resulted in his own severe leg injuries, a ruptured ear drum and brain damage. 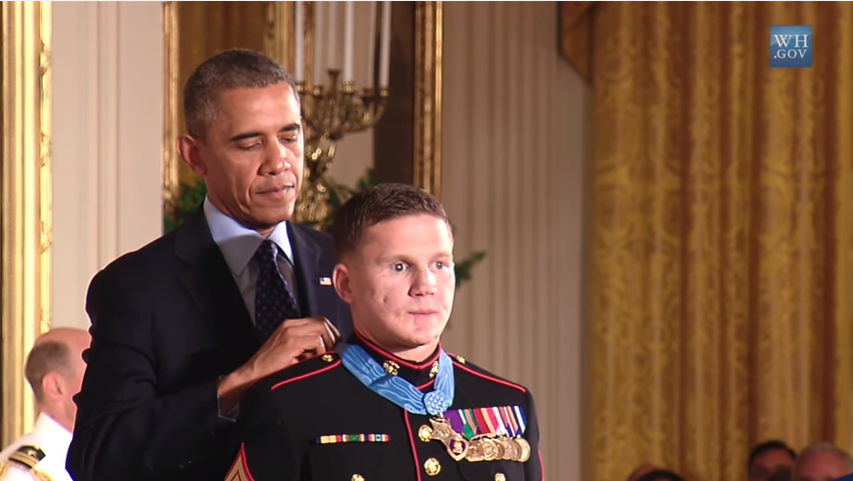 Afghanistan -- When a grenade was thrown onto the rooftop where Corporal Carpenter was stationed, he threw himself in front of his fellow Marine to shield him from the blast. He was severely wounded, but his compatriot was saved. 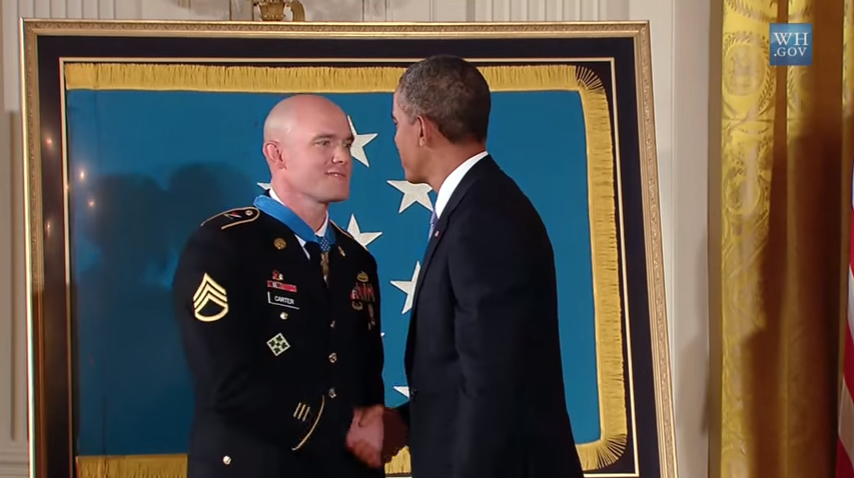 Afghanistan -- Despite being surrounded by hundreds of enemy fighters, Specialist Carter ran through gunfire multiple times in order to resupply ammunition and carry a fellow soldier to cover. Even while wounded, Specialist Carter returned to the fight, also recovering a radio that enabled his squad to coordinate evacuation with other soldiers. 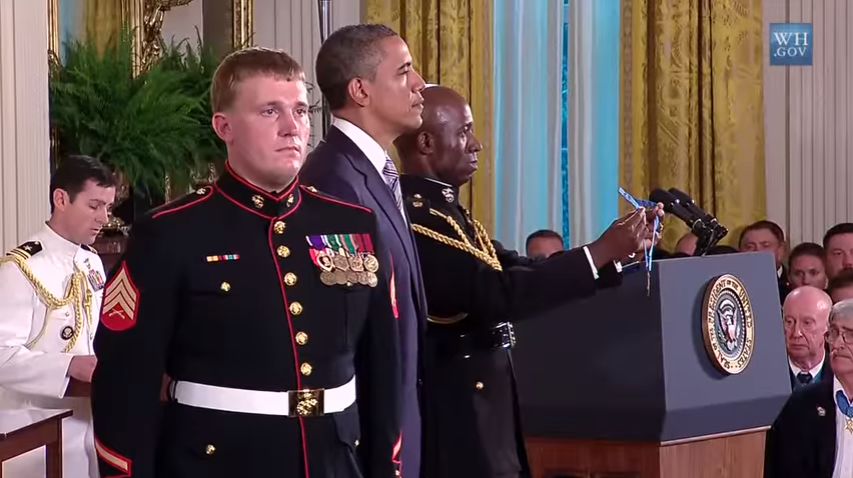 Afghanistan -- Taking a gunner’s position in a gun-truck, Sergeant Meyer and his driver made three forays into a village surrounded by enemy fighters in order to evacuate injured Afghan soldiers as well as a trapped U.S. team. On his final run, Meyer continued his mission on foot, still under heavy fire. 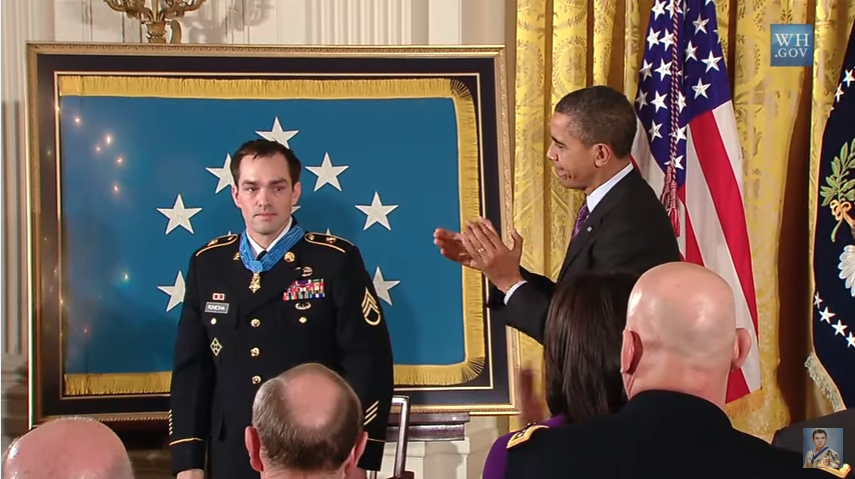 Afghanistan -- When hundreds of enemy fighters surrounded his complex, Romesha engaged in reconnaissance, engagement of the enemy and mobilization of his fellow soldiers. Despite shrapnel wounds, he continually exposed himself to enemy fire in order to locate the point of attack, enabling air support to kill over thirty enemy fighters. 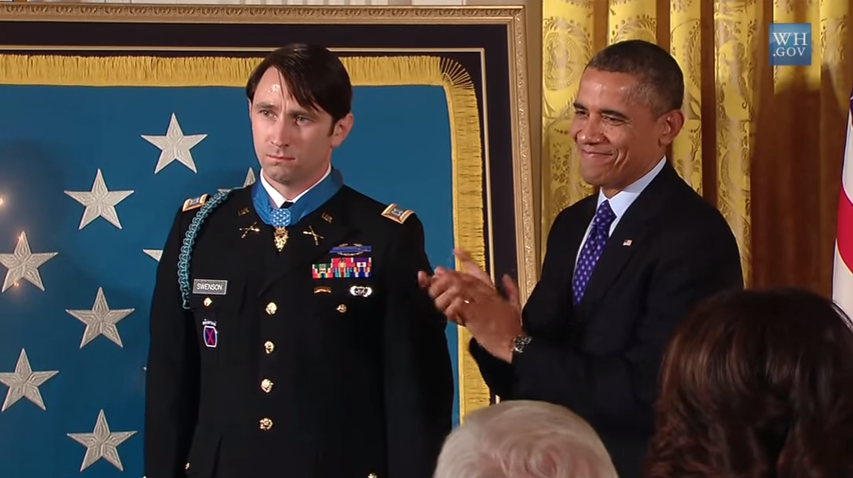 Afghanistan -- On the way to a meeting with village elders, Captain Swenson and his team were ambushed. However, Swenson repeatedly exposed himself to enemy fire in order to coordinate a response and evacuate multiple injured men. 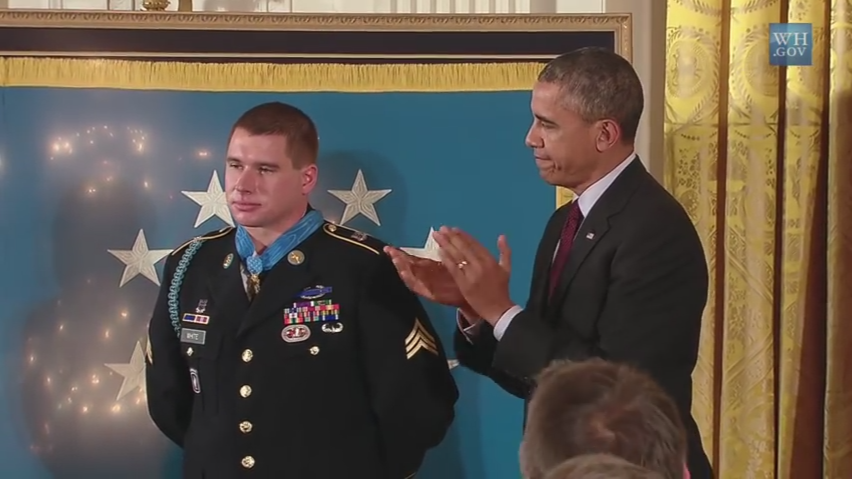 Afghanistan -- When ambushed from above by enemies on a narrow, rocky path, Sergeant White was knocked unconscious by a grenade. After waking up, he noticed a wounded soldier nearby, and came to his aid, despite being hit in the face with shrapnel. After aiding a dying Marine some distance away, Sergeant White returned to the first injured soldier and used his belt as a tourniquet, saving his life. Continually exposing himself to gunfire, White located a working radio, notifying a support team. 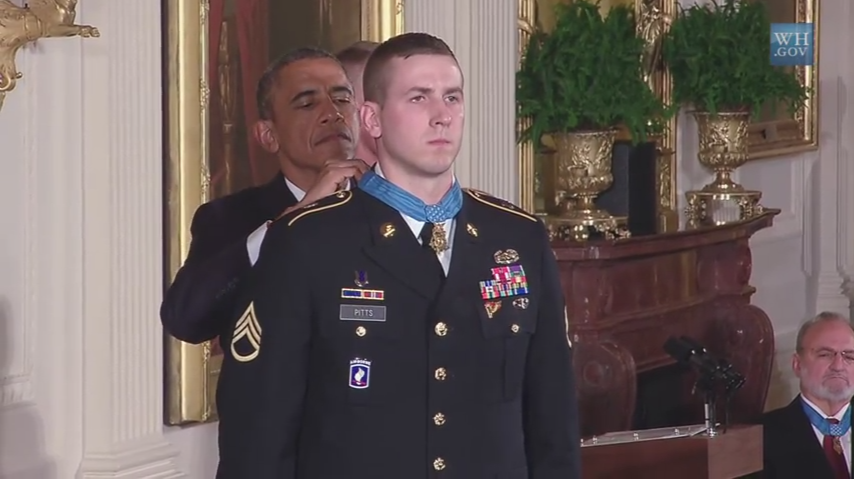 Afghanistan -- While providing security at an observation post, Sergeant Pitts came under heavy fire, sustaining near crippling wounds to his legs and arms. Disregarding his safety, he continued to engage the enemy until reinforcements came, at which point he conveyed information into his radio for the benefit of the command post. 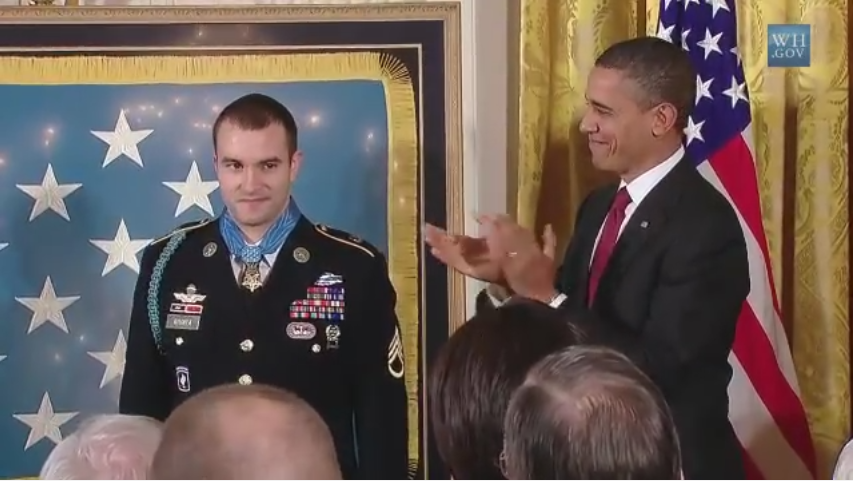 Afghanistan -- In the midst of withering enemy fire, Giunta noticed that several members of his squad were missing. While giving first aid to one wounded soldier, he was injured, yet this did not prevent him from separating from his group to shoot and injure two enemy soldiers who were carrying away another member of his squad. 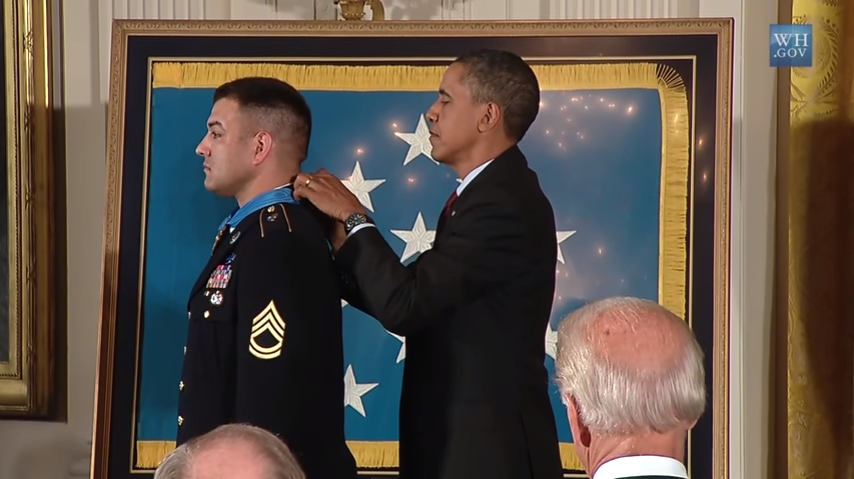 Afghanistan -- During a mission to clear a house of high value combatants, Sergeant Petry and two fellow Rangers came under automatic weapon fire. Although wounded in both legs, Sergeant Petry grabbed a grenade that landed at the feet of his two wounded compatriots and threw it away from them. His selfless move resulted in a lost hand and other shrapnel wounds, but he succeeding in saving his fellow Rangers.