Editor’s Note: This report contains foul language that some readers may find offensive.

If Donald Trump wants to build a wall, he might consider one around Hollywood. After all, the majority of The Hollywood Reporter’s list of top 100 influencers are progressive liberals who donate to democratic congressman, committees and candidates. Thus it is only natural that these movers and shakers have taken to movies, shows and music to revile Donald Trump in whatever way possible. They know they have a potent platform to incite change. In the words of activist actress Kerry Washington, “We have power in what we do.”

With that power, these Hollywood influencers have belittled, cursed and attacked Donald Trump on their late night, HBO and broadcast platforms. The presumptive GOP presidential nominee has been labelled a “fascist.” He has also been compared to Hitler by a Nazi-garbed comedian, and even raped and murdered in the animated show South Park. In all, more than 20 TV shows have targeted him.

Trump has been derided on all the major late night shows since the moment he announced his presidential bid. Jon Stewart, John Oliver, Trevor Noah, Stephen Colbert, Conan O’Brien, James Corden, Jimmy Fallon and Seth Meyers have taken repeated pot shots at him; however, many have been grossly exaggerated. 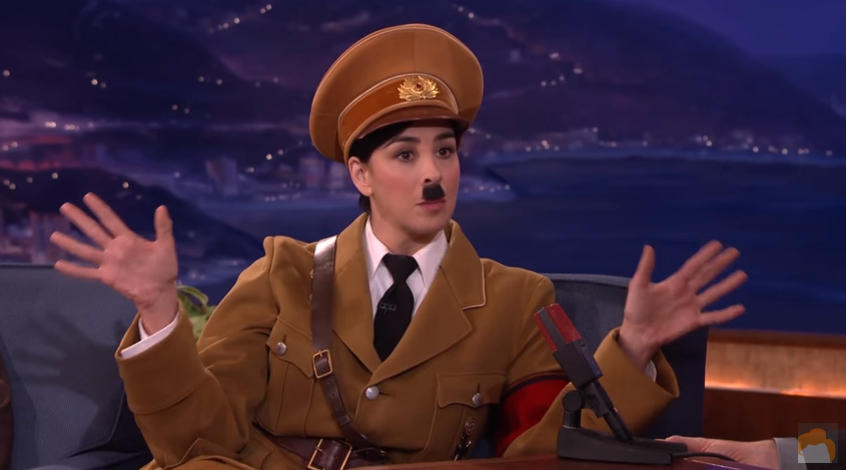 Liberals have called Trump a fascist, although if they looked into the history of fascism, they would discover that it’s actually quite left of center. On Conan, guest comedian Sarah Silverman dressed as Hitler and discussed how Trump’s views were “90 percent” on par with the German dictator’s. Silverman then went on to mock Trump’s penis size. “What kind of person talks about his penis size on national television?” she asked. Similarly, in a Late Show episode following the Orlando tragedy, Colbert drew a swastika diagram to explain Trump's reaction to the shooting.

On Late Night, Seth Meyers agreed that “calling [Trump] a racist or fascist is important, but doesn’t seem to rattle him.” Instead, Meyers recommended actions or words that “chip away at his ego.” Trevor Noah was happy to do that by inserting Trump’s face in place of Beyoncé’s in the new visual album “Lemonade.” Called “Orangeade,” the parody mocked Trump’s feeling of rejection by the RNC. At the end of the video, a blurb read: “Now available for streaming, except for Mexicans.”

John Oliver spent over twenty minutes attacking Trump on one segment of Last Week Tonight. In a description of the recorded HBO show, show staff wrote: “Our main story was about Donald Trump. We can't believe we're saying that either.” While covering Trump’s response to the Brexit, Oliver called the candidate “some ridiculously-haired buffoon peddling lies and nativism.”

Jimmy Fallon has not only called Trump names, but has become an imitation expert. In over ten separate instances, Fallon dressed and spoke like the candidate, performing unflattering sketches that garnered him millions of views. In fact, during a chummy interview with Hillary Clinton, Fallon declared that Trump was “the best thing that happened to our show, I mean he’s in every, every monologue.” The two then laughed like old friends.

Scripted shows have been even more critical, with mentions or “appearances” on more than 10 shows, including Scandal, The Carmichael Show and The Night Shift.

On liberal actor Alec Baldwin’s new game show The Match Game, contestants and celebrities were asked to fill in this sentence’s blank: "Donald Trump has created a new Olympic event that he knows he can win. It’s a contest to see who can ______ the most times in 60 seconds." The words “lie,” “fart” and “speak” were chosen by the celebrities participating. Lefty actress Rosie O’Donnell, who had selected “lie,” declared to Baldwin: “You know my feelings of that orange slug.” Boisterous laughter ensued.

Trump’s habit of plain speaking was also criticized on Lifetime’s UnReal. During one episode, “racist” dating show contestant Beth Ann was reassured when she heard that her Twitter following had skyrocketed in response to her “speaking her mind.” The producer then called her “Donald Trump with boobs.” In a later episode, someone calls Beth Ann’s unborn child a “future Trump supporter.”

In a new animated Netflix show called “All Hail King Julien,” kids are indoctrinated about the evils of Donald Trump. (Like any liberal propaganda show, they also throw in lessons on the 1 percent, gun control and trigger warnings). One episode, which is set in the jungle, mocks the Republican presidential candidate, and includes references to a wall being built by the lemurs to keep out other animals. Lyrics include: “Don’t touch our stuff” and “We never change and don’t like strange.” 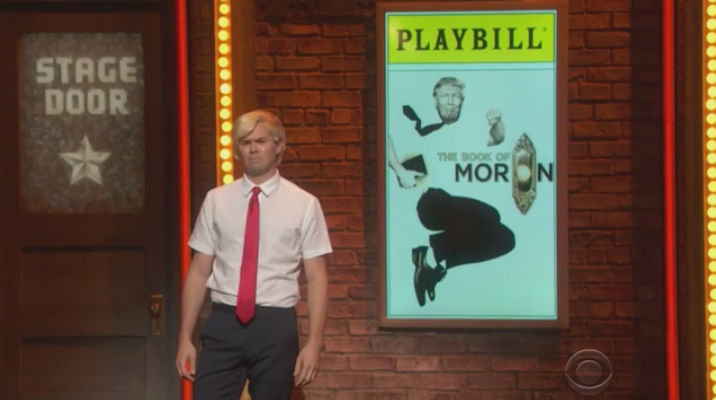 Trump’s proposed wall with Mexico was also mentioned at the Tony Awards, where the candidate was made the perfect laughingstock. Host James Corden stated that the audience was “so diverse that Donald Trump has threatened to build a wall around this theater.” Later in the evening, a planned skit starred a ridiculous Trump look-a-like in the “Book of Moron” – a take on the award winning musical The Book of Mormon. The actor playing Trump sang: “Hello, my name is Donald Trump. And I would like to build a wall that goes straight through your house.”

In a similar display of inanity, ‘Trumpo’ danced around pantsless throwing salad greens on an episode of NBC’s Maya & Marty.

During a Scandal episode called “Trump Card,” Trump-esque presidential candidate Hollis Doyle acted ridiculous, declaring: “I’m giving America back to Americans. No more of these south of the border types with their greedy little hands or these shady fellows with mustaches looking to blow up our buildings!” By the end of the episode, Doyle was out of the race, having been caught revealing that he actually didn’t believe what he told supporters. In an interview with The Hollywood Reporter, Scandal actress and outspoken liberal Kerry Washington discussed Doyle’s character and his overblown statements, saying, “There have been times where we all thought ‘oh, we can’t say that, it’s too outrageous.’” Even so, the show’s writers must not have felt too constrained considering the content they did include.

Yet, most disturbing of all was the violent treatment which Trump received. In a September 2015 episode of South Park, Trump was raped and murdered by an opposing presidential candidate. In the Netflix show Chelsea, a group of girls was asked which presidential candidates they would “marry, fuck or kill.” Every participant in the game unsurprisingly “killed” Trump.

From folk to country to rap, singers have used Trump as a way to be culturally relevant. However, treatment of the presidential candidate has been anything but flattering.

In a recent and extremely disturbing music video by Kanye West, several waxen figures of celebrities —including that of Trump — were pictured nude in bed together with West and his wife. Actress Lena Dunham, who is notoriously pro-Clinton, called the video “sickening.” However, she also stated: “I’m sure that Bill Cosby doll being in the bed alongside Donald Trump is some kind of statement, that I’m probably being trolled on a super high level. I know that there’s a hipper or cooler reaction to have than the one I’m currently having.”

Rapper YG and his partner Nipsey Hussle also took to song to express hatred for the real estate mogul. The music video, entitled “Fuck Donald Trump,” has more than 6 million views and is filled with a seemingly interminable repetition of the title’s words (32 times). Later in the song, YG sings “All the niggas in the hood wanna fight you. Surprised El Chapo ain't tried to snipe you. Surprised the Nation of Islam ain’t tried to find you.” The song went on to predict that, if Trump wins, he’ll probably “get smoked” or killed. 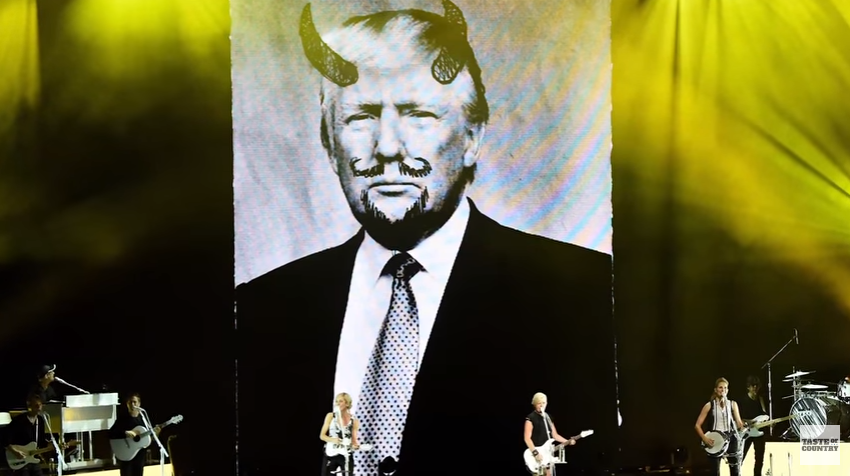 It’s not just rap. Country band Dixie Chicks have also made no secret of their hate for Trump. During their 2016 World Tour, the trio displayed a large picture of Trump with devil horns, mustache and goatee. The defaced candidate made his appearance during a section of the song “Goodbye Earl,” which centered on the murder of an abusive husband.

Guitarist Tom Morello went far beyond the "Dixie Chicks." In an intro to the song “Old Man Trump,” originally written about Donald’s father, but adapted to reflect the Republican candidate, Morello announced: "I'm standing up against Old Man Trump, because when it comes to race relations, he's like an old-school segregationist. When it comes to foreign policy, he's like an old-school napalmist. When it comes to women's issues, he's like a frat-house rapist. So let's not elect that guy." Of course, Morello is also a founding member of the band “Rage Against the Machine” – whose lefty songs have condemned American imperialism and the police as well as encouraging seizure of the means of production. As Morello himself stated sarcastically, his songs are “excellent choices to jam out to at Young Republican meetings!”

From Giving Trump AIDS to the “Art of the Deal”

Whether in documentaries or traditional movies, anti-Trump sentiment runs high in the film world.

A 2012 anti-Trump, eco-friendly documentary by Emerging Pictures, entitled You’ve Been Trumped, was re-released in 2015.  The film centers on the ugly battle between Trump and Scottish homeowners over a plot of land the former desired to convert into a luxury golf course. The You’ve Been Trumped website describes the film as a “rare and revealing glimpse of the unfiltered Donald Trump.” Unsurprisingly, outspoken liberal TV personality Rosie O’Donnell and PBS host Bill Moyers devoted segments of show-time to airing the film.

At least Trump actually acted for himself in the above documentary. That’s more than can be said for movies like The Brothers Grimsby, where Director Sacha Baron Cohen has Trump’s character get sprayed with blood from an HIV+ African boy. During an interview with Entertainment Weekly, Cohen called the final moments when Donald Trump gets AIDS “a fairy tale ending.” 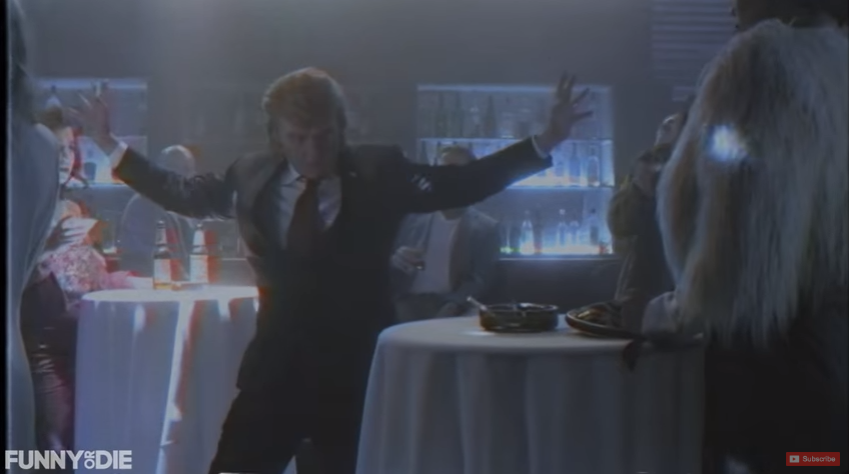 Johnny Depp also relished the opportunity to portray Trump in movie called Donald Trump’s Art of the Deal, directed by Jeremy Konner. In an interview with Entertainment Weekly, Konner stated: “Johnny brought out more [sic] Trump’s inner anger. He’s ruthless, and he’s done a lot of terrible things to a lot of people, and he has no remorse. I think he does have a lot of darkness in him, and Depp really brought that out…” Depp commented on the performance by calling Trump a “brat.”

Need a Primer on the “Americus Trumpus”?

When it comes to books, liberals are targeting the youngest among us. From children’s books to comic books to coloring books, Trump the “man-child,” “beasty” and “supervillain” has become the unsavory star of at least four recent written works. 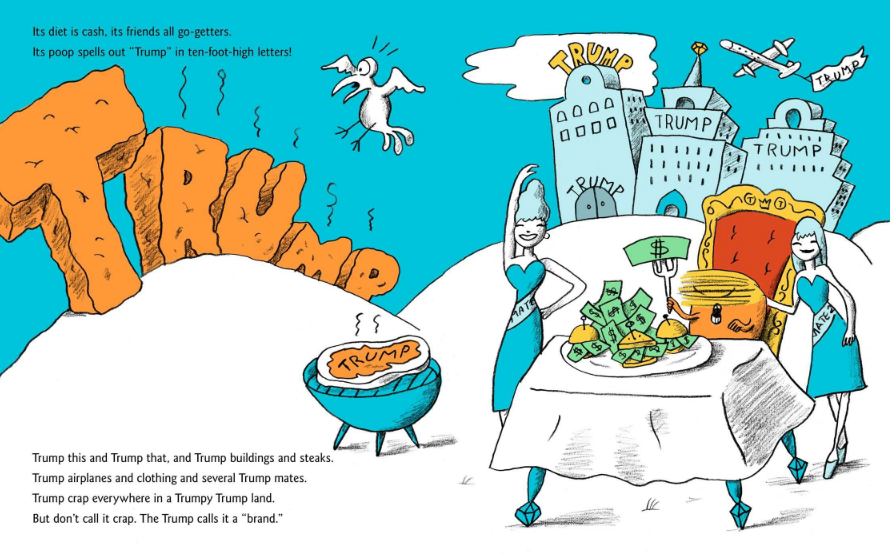 A Child’s First Book of Trump, which actor/author Michael Ian Black has dedicated to the “haters and losers,” is a primer to help children identify the “beasty” called an “Americus Trumpus.” Some stanzas include: “Now where does it [Trump] live? On flat screen TVs! It rushes toward every camera it sees” and “Its diet is cash, its friends all go-getters. Its poop spells out ‘Trump’ in ten-foot-high letters!”

Trump also stars in an assortment of adult humor, including coloring and comic books. In the Marvel comic Spider-Gwen Annual #1, supervillain M.O.D.O.K. gets a makeover as Donald Trump, complete with small hands, orange skin and wildly racist comments like “Back on your feet, foreign filth!” Trump 2016: Off-Color Coloring Book, one of many coloring books about the candidate, was featured on CNN and reads “no one is safe from the hubris and political incorrectness of the Donald.”

In the same way, it seems no one is safe from the liberal agenda which has sought to revile Trump in every way possible, even while glorifying its lady leader – Hillary Clinton. See how the media has paved the way for Madam President here.