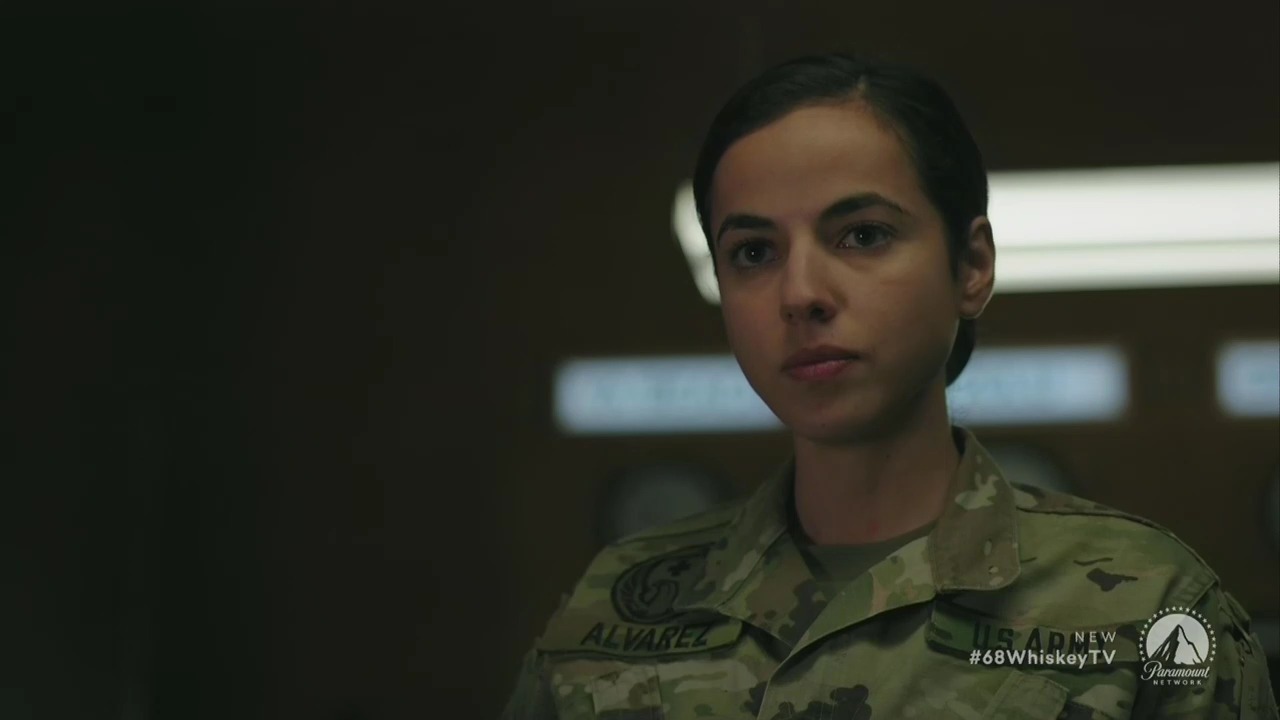 Last week, Paramount’s latest television series, 68 Whiskey, introduced viewers to the plight of Sergeant Rosa Alvarez (Cristina Rodlo) whose DACA status is being revoked. Thus, she’s being dismissed from the Army. January 22's episode, "Finger Lickin' Good," continues the storyline, with a lot of insults for our "racist goddamn country."

Alvarez isn’t going quietly, and even tries to appeal to her commanding officer Colonel Harlan Austin’s (Lamont Thompson) emotions, which, of course, end up becoming about racism:

Austin: Sergeant Alvarez, you're gonna be on the morning flight to Bagram.

Austin: From there, you'll be flown directly to Ramstein and then on to Fort Hood.

Alvarez: And get deported the minute my feet hit U.S. Soil.

Austin: I have no choice in the matter. Tried to get more details on your discharge, but information is scarce. What I have been told is that your mavni status is being revoked by executive order. Wouldn't get more specific than that. -

Alvarez: This is straight up "Send all the Mexicans back to Mexico" bullshit.

Austin: Neither of us is in a position to make that call.

Alvarez: Afraid I am, sir. I was granted that status as a medical professional. Unless you lodged some sort of complaint, I don't see how anything's changed.

Austin: Of course I didn't. Your duty here for me has been exceptional. Save for that incident on the roof of the dfac. But I'm gonna sweep that little matter under the rug. Still sorry I missed it.

Alvarez: I'm sure someone has photos, sir.

Austin: I hope that you can straighten all this out one day to your satisfaction.

Alvarez: I doubt it, sir.

Austin: Hmm. Just realized you're probably under no obligation to call me "Sir" anymore.

Alvarez: You know, I might as well go back. Because I have no fucking idea what kind of racist goddamn country I'm defending by being here. I worked damn hard so I wouldn't have to scrape white people's shit off of toilet seats like my mom. But now, even that's starting to look good.

Austin: As a black man who's had to deal with an ungodly amount of bullshit to rise to my rank, I'm sympathetic to your plight. But as a colonel in the United States Army, I obey the chain of command. Chain of command is telling me you're out.

Alvarez: Fuck the chain of command.

Alvarez doesn’t end up having to leave after all, as her fellow Army medic, Cooper Roback (Sam Keely) comes up with a plan to say they’re getting married. Right, because that’s never been tried before!

The idea comes to Roback after his own emotional insistence that Alvarez shouldn’t have to leave. He, too, inserts politics into it:

Roback: Lot of weird shit's happened since we saw you last.

Alvarez: Lot of weird shit's happened since I saw you last.

Alvarez: No time. Just wanted to find you guys and say good-bye.

Roback: Where you going?

Alvarez: My mavni status was pulled. Just because. Colonel Austin's got me on the next convoy to Bagram. From there to Germany. From there to Texas. From there, I get deported back to Mexico.

Alvarez: Oh, I'll be sure and send postcards from all the lovely places I visit.

Roback: Well, there's gotta be something you can do.

Roback: Wait. They didn't even get anyone to replace you?

Alvarez: I'm sure whoever it is won't find all you guys' bullshit nearly as entertaining as I do.

Davis: Took us months to break you down. Ain't looking forward to doing it all over again.

Alvarez: I have faith you'll succeed.

Roback: Did you try contacting--

Alvarez: Tried everything. I love you, but there's nothing you can think of that I haven't thought of already.

Davis: Let's get this over with.

Alvarez: Not gonna miss you.

Davis: Not gonna miss you, either.

Roback: No. This is bullshit! I'm not gonna let them break up the band and stick you in a fucking detention center just 'cause some asshole in Washington wants to get reelected.

Alvarez: God, you're making this so much harder than it has to be. Just say good-bye...

Alvarez: And wish me luck, damn it.

Roback: No. I'm gonna figure this one out.

Alvarez: Well, while you're figuring it out, I'll be on my world tour.

As it turns out, Roback coming up with a plan to marry Alvarez complicates his own romantic life. The woman he’s been having sex with in a supply closet, Corporal Grace Durkin (Gage Golightly), no longer wants to sleep with him because he’ll technically be a married man. “After my dad left my mom for another woman, I promised myself I'd never fuck a married man. And I meant it,” she tells Roback. Never mind that Grace is technically with Sasquatch (Derek Theler).

Clearly, the priorities of our main characters are all over the place, yet it’s the politicians like President Trump seeking to enforce immigration laws who are the “asshole[s].”