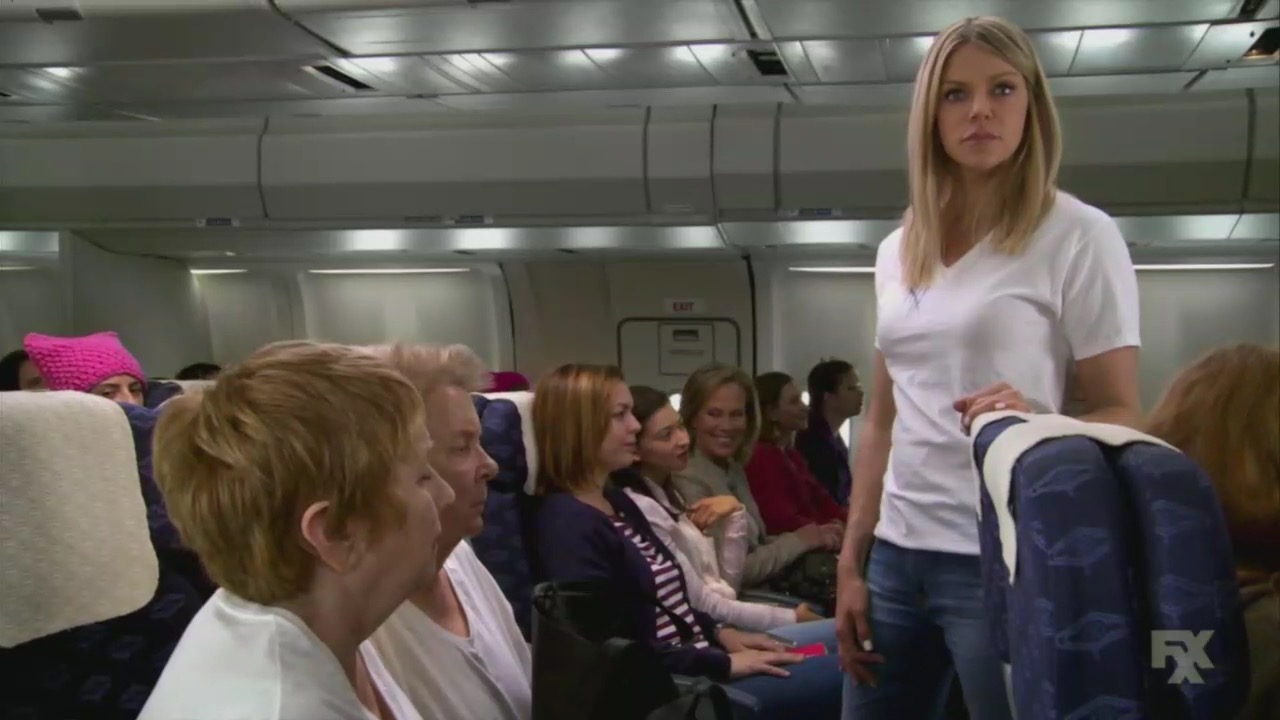 In Wednesday's episode, "The Gang Beats Boggs: Ladies Reboot," the women of It’s Always Sunny in Philadelphia do the Wade Boggs Challenge of drinking 70 beers on a cross-country flight. The twist is that they go on an all-female flight (except for one male attendant) to California for the Women’s March, complete with pussy hats and feminist jargon.

The episode is an all-female version of "The Gang Beats Boggs" episode from season 10 of It's Always Sunny. Dee Reynolds (Kaitlin Olson) insists, "It's the same exact thing, but it's with women. Right? So it's a new idea!" and “The only way to beat men is by competing against other women.”

The male flight attendant volunteered to work the flight because he thinks “women have be disrespected for far too long,” and he wanted to “honor them and be their champion.”

After one of the women says that all racehorses are male they drunkenly began chanting “pussies on the track” because female horses “can run just as fast as the boy horses,” except all horse genders race, so they’re grasping at straws to find something to protest. Oddly enough, that’s what the Women’s March is all about - protesting things that should be non-issues based on false information.

A hallucination of famous tennis player Martina Navratilova tells Dee that “male opponents had the luxury of hating each other. But, as women, we have to stick together to fight for the respect we deserve.”

And apparently giving women the respect they deserve involves getting violently ill all over the plane. Artemis (Artemis Pebdani) tells Dee at the end, "I'm pulling the plug on your male hand-me-down plot. As women, we deserve better. We deserve our own story. That tea that I served was spiked with ayahuasca." We see all the women puking and running to the bathroom because "the maximum gross-out… nobody saw that coming from women," Artemis says.

This isn't the first time Hollywood has pushed the feminist march and certainly won't be the last. Fortunately, this episode was not as bad as it could have been and in fact only further drove home how nonsensical and ridiculous the Women's March really is.