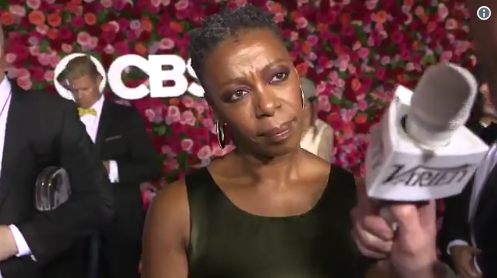 Not surprisingly, liberal entertainers says Donald Trump is not welcome … to attend a play. Coming from a group that preaches inclusion, that doesn’t seem very inclusive.

During the Tony Award red carpet, Harry Potter and the Cursed Child stage actress Noma Dumezweni was asked if Trump should watch the play. She responded with, “No.” She started to walk away before turning around,  “Anyone else, yes.”

Dumezweni says that the play, set 19 years after the last book, is “very important” especially in the current political situation.

To her, the reason the show resonates in America, especially in our political situation is because, “We all, as human beings, are fighting to be connected, especially to be seen.” She continued, “If you’re not seen and not heard, that’s where dangerous stuff happens. That’s where people under the radar do very cruel things. That’s what this play is about.”

After tweeting that she only spoke her own opinion and not to tag Harry Potter writer, JK Rowling in the video. Rowling replied, “I can @ you though, right?” Rowling called Trump worse than Voldemort after the travel ban in 2017. She tweeted, “How horrible. Voldemort was nowhere near as bad.”

If the show has such a strong message, wouldn’t the liberal elite want Trump to hear it? Maybe Harry Potter and the Cursed Child would positively influence him. But we would never know, because he’s not invited to hear the message.