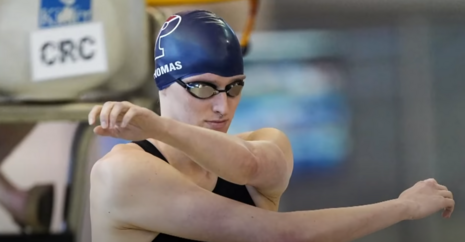 Now christened Lia Thomas, William Thomas interviewed with Good Morning America to defend his intrusion into women’s sports in March. Thomas’s participation was the subject of a massive controversy when he became the first man to win the 2021-2022 NCAA Division I Individual National Title in the 500-yard freestyle. After stealing the title from the hardworking women competing, Will Thomas is now defending his decision to compete.

Thomas was an unremarkable swimmer on the men’s team at the University of Pennsylvania. In 2019 during his sophomore year, Thomas’s gender dysphoria made him depressed and suicidal, and he decided to start taking hormonal replacement theory to try and “liberate” himself. By the time he was a senior, he had liberated himself right onto the women’s team.

“Trans people don't transition for athletics,” Thomas said, “we transition to be happy.” It seems Thomas’ understanding of being happy is robbing young women of their ability to compete freely and fairly. In the interview, Thomas denied any biological advantage over his fellow female athletes.

“I'm not a medical expert, but there's a lot of variation among [cisgender] female athletes,” Thomas said on GMA Tuesday. “There's just women who are very tall and very muscular and have more testosterone than another [cisgender] woman. And should that then also disqualify them?” Thomas is correct that he’s no medical expert. He then continued to deny that he did not seek any competitive advantage and was happy that he is now an influential figure for LGBT representation in swimming.

How backward has our country become that a hulking male can be crowned the champion of women’s sports? Only from the left can you find the defense of the destruction of what a woman is.