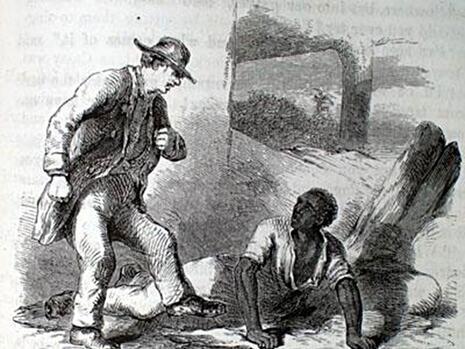 Blarney Joe has always made a big deal about his Irish roots. And, unlike many of Joe’s claims, they’re legit. He’s Irish on his mother’s side. But what about the paternal side?

When, many hundreds of words into the article, Politico’s Ben Schreckinger gets around to it, he writes, “As it turns out, there were also reasons for Biden to avoid calling too much attention to his paternal ancestry.”

Two of Biden’s great-great-great-grandfathers owned slaves. According to the 1800 census, Jesse Robinett, owned two slaves in Allegany County, Maryland. Thomas Randle, Schreckinger writes, “enslaved a 14-year-old male in the 1st District of Baltimore County, Maryland, in 1850.” Oh, and there’s “a distant tie to Varina Anne Banks Howell, the wife of Confederate President Jefferson Davis, via Biden’s ancestor Allen Robanet, who probably came to Pennsylvania from England in the 1680s.”

Besides, “Biden’s ties to slavery were relatively modest,” Schreckinger says. “Tens of millions of Americans have ancestral ties to enslavers or the Confederacy, and few would argue those ties make them unfit for office.” (Careful, Ben -- unless you’re consulting Teen Vogue or The Root on an hourly basis, saying what is and isn’t acceptable to the identity industry is hazardous.)

But Schreckinger writes that Biden commissioned a full genealogy in 2004. It was never published, which seems strange for a politician eager to prove his working class Irish pedigree. And “The genealogy and accompanying article that Bannerman and Roberts produced do not make note of these ancestral ties to slavery. Bannerman explained it is common for Americans with colonial-era roots on the continent to have ancestors who enslaved people.”

So it seems Schreckinger is the only member of the press curious enough to wonder about the ancestry Biden chooses to not emphasize. For what that’s worth, good on him. It’s more than  USA Today, Politifact and Snopes did when an internet meme emerged with versions of the information in the summer of 2020. The Black Lives Matter riots were in full swing and Joe was running to defeat the hated Trump.

But what of the editorial decision to bury the only actual news nearly 2,000 words into a 3,000-word article? Schreckinger is coy about the entire issue:

In the end, Biden’s ancestry did not become part of the raging inferno of an election year fight over race and American history.

It could be because Biden has subtly managed the public perception of his background in a way that maximized his appeal while deflecting uncomfortable scrutiny. Or it could just be the luck of the Irish.

Or it could be having a slavish press.