Example #547,282 why a modern liberal arts BA has all the inherent honor and usefulness of a fake phone number scrawled on a cocktail napkin: Michael Todd Landis writing on George Mason University’s History News Network proscribing language we are allowed to use when talking about the Civil War.

Landis, Assistant Professor of History at Tarleton State University, doesn’t really have much to say, and certainly nothing new. Mostly, his brief post reads like the work of a garden variety faculty lounge lizard making sure his left-wing credentials are in order for the new school year. 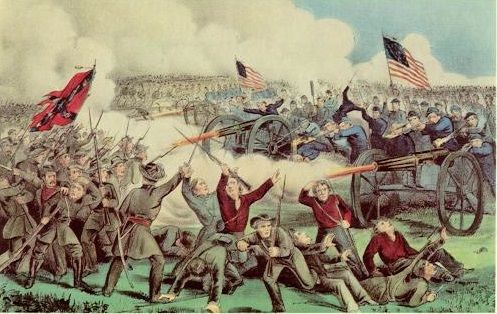 Landis echoes the anti-Confederate zeitgeist, writing that “a new generation of scholarship has changed the way we understand American history, particularly slavery, capitalism, and the Civil War,” and asserts that the language we use about that era should change. After all, the “terms handed down to us from the conservative scholars” of last century “served either to reassure worried Americans in a Cold War world, or uphold a white supremacist, sexist interpretation of the past.” You just knew that was coming.

Thankfully Landis and his with-it contemporaries are here to put things right. He quotes approvingly legal historian Paul Finkelman’s argument that The Compromise of 1850 should really be known as the “Appeasement of 1850.” And that that would be a truly significant change, if only we could be sure our public high school grads could identify the year in which it occurred.

Another example for Landis is Edward Baptist, who argues that “Plantations” be called “labor camps.” For “‘slave-owners’ (which seems to legitimate and rationalize the ownership of human beings), he uses ‘enslavers.’”

Frankly, if “slave-owner” sounds at all legitimate and rational to you, academic terminological inexactitude is the least of your problems. But Landis finally gets to his own contribution:

Wow, that’s it? Splitting hairs over “Union” vs. “United?” It makes not the slightest difference to anyone not steeped in the War and its literature, and it should be insulting to those who are (except, of course, those with academic sinecures, who’ll swallow anything with a lefty pedigree).

The dichotomy of “Union v. Confederacy” is no longer acceptable language; its usage lends credibility to the Confederate experiment and undermines the legitimacy of the United States as a political entity. The United States of America fought a brutal war against a highly organized and fiercely determined rebellion.

Yes, which is why “rebels” is used interchangeably with “Confederates” and “southerners.” Landis wants to show his moral superiority over those old “conservative scholars,” by joining an argument going on for generations. Bruce Catton, once the dean of Civil War history and its greatest popularizer, made no bones about it: the South was in rebellion and thus were rebels.

But why quibble when you can beat up on Confederates and score points with all the right lefties? Confederates can't fight back, and nobody else dares. So flags are being purged from retail stores, statues are coming down on college campuses, the mob is vandalizing memorials and howling for the dead to be exhumed and moved. And the NAACP is calling for Confederate likenesses to be sand blasted off Stone Mountain.

Compared with the rest of the Tolerance Taliban, Landis’ call to break from the linguistic past is nothing more than an anemic “me-too!”