Morgan Freeman disappointed some fans during Sunday’s episode of National Geographic’s “The Story of God” when he downplayed Islamic terrorism, saying Islam aims for peace.

News reports of Islamic extremism by “a tiny percentage of Muslims” do not reflect the mindset of the majority of Muslims, Freeman said. 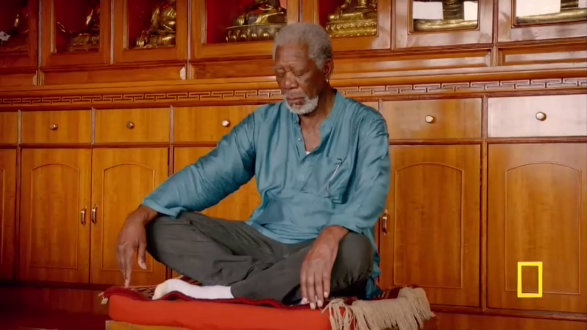 “Meeting Muslims face to face, I've learned that Islam aims for people to live in peace,” Freeman remarked. “But watching the news today, you'd be forgiven for not knowing that. A tiny percentage of Muslims are waging war against the West.”

The apocalypse was the theme of the second episode of the National Geographic Channel’s new docu-series hosted by Freeman.

“Isis and other religious extremist groups believe the apocalypse has already begun.”

Freeman interviewed Maajid Nawaz, who was radicalized as teenager living in the UK and joined Hizb ut-Tahrir, precursor to Al Qaeda.

“What I mean by Islamism is the desire to impose any version of Islam over society,” said Nawaz. “And that ideology was sold to me as if it was the religion of Islam and that's what I adopted. I grew up facing a very, very severe form of violent racism, domestically within the UK.”

The actor also stated that the Jewish, Christian, and Muslim religions pay homage to the same God. While there is some historical evidence for this conclusion, the religions are very different and should not be grouped together.

“Islam is an Arabic word that means surrender. Submission to God's will. The same god the Jews and Christians worship,” said the star.

He visited the caves where the Dead Sea Scrolls were discovered. Kim Haines-Eitzen, expert in early Christianity related to him her argument that Roman Emperor Nero was the antichrist.

“The Christians hated Nero. He was the antichrist,” Freeman narrated later.

As in the first episode of “The Story of God,” Freeman shifts his attention midway to science.

“Culturally, we seem to have a morbid attraction to the apocalypse,” he begins.

He interviewed Stewart Shankmans, psychology professor at the University of Illinois at Chicago, who studies our subconscious belief in the apocalypse and believes it may be hard-wired into our brains.

In a lab test of human subjects’ responses to small shocks Shankmans concluded that, “knowing when the bad thing is going to come creates a qualitatively different emotional experience than not knowing.”

Therefore, we try to predict doom in order to allow ourselves some solace.

Freeman examined Hinduism and Buddhism, which believe the world goes on in cycles with no final apocalypse. He also talked to Hurricane Katrina survivors, who said their experience felt apocalyptic.

Contradicting traditional views of what apocalypse stands for, Freeman tells his viewers that apocalypse, a Greek word meaning lifting the veil is about enlightenment not war and death.

“It's a state of mind and heart that helps us see the truth. Not some far off day of judgment. It's here, it's now,” he concludes.