“Much like Syria and Iraq the terrorist group has made their presence known in the country [Libya], carrying out several gruesome beheadings including this one last February, allegedly showing militants killing Coptic Christians on a beach near Tripoli,” said CBS News Correspondent John Vigliotti Feb. 19 on This Morning. 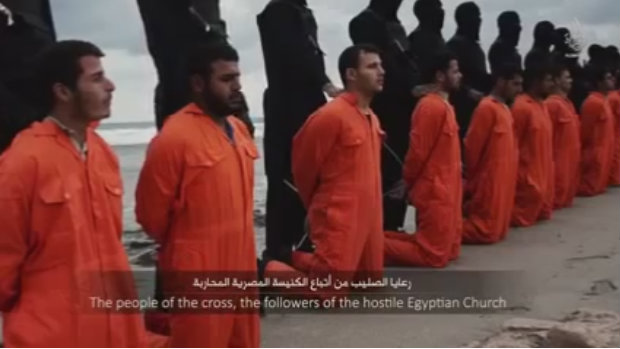 CBS along with ABC and NBC would rather not talk about the Islamist murder and persecution of Christians throughout the Middle East and Africa. In fact, their evening news programs have not broached the subject at all in 2016, and the daytime shows have barely mentioned it. They certainly are not comfortable applying the legal term “genocide” to the persecution despite the mountain of evidence that is exactly what is going on.

The networks are taking their cue from the Obama administration. Despite intense lobbying and bipartisan support for the move, the administration has resisted using the term “genocide.” Sec. of State John Kerry is expected to make the call Thursday on whether the slaughter of Christians, Yazidis, and other minority groups should be classed a genocide.

If he does, it will be harder for the administration to resist pressure to give preference to Christian refugees and would be an implicit acknowledgement that their suffering comes at the hands of the Muslims President Obama is so hesitant to anger.

The legal definition of genocide comes from a vaguely worded 1948 United Nations document: “[G]enocide means any of the following acts committed with intent to destroy, in whole or in part, a national, ethnical, racial or religious group, as such.” The definition includes killing, inflicting serious bodily or mental harm, preventing births, and forcibly transferring children.

Cameron Hudson, the director of the Center for the Prevention of Genocide at the U.S. Holocaust Museum noted in a detailed report that around 1,500 Yazidi have been murdered, over 3,500 women and children have been taken to camps in Iraq and Syria, and hundreds of thousands have been forced to flee.

Hudson says the goal of the U.S. and other nations should be to “identify and rescue the Yazidi prisoners, as well as treating some areas as ‘crime scenes’ that should be documented for future international prosecutions.” These suggestions could apply to dealing with the plights of other minorities as well.

The United States government has been liberal in its other designations of genocide.

The 1995 Srebrenica, Bosnia massacre, smaller than other designated genocides such as those in Rwanda and Darfur killed over 7,000 Bosniak Muslim males and displaced over 20,000 more civilians.

The networks did suggest the persecution of Rohingya Muslim refugees might be genocide. Some statistics say that almost 140,000 of the citizenship-stripped minority have been displaced to dirty, disease-ridden camps by the Burma government since 2012 clashes with local Buddhists. 800,000 Rohingya are settled in two townships with restrictions on movement.

“No wonder people are risking everything to leave. Some activists have called this a slow genocide,” said ABC’s Bob Woodruff Wed. Oct. 21, 2015 on Nightline.

ABC will not, however. At least not when it comes to Christians, and not even when the people the network interviews use the term. “When I saw the tears of my people, they are glad because they are leaving the situation, a genocide, a persecution what’s going on in my country. But at the same time, they are saying good-bye to the community,” Father Douglas Bazi of Mar Elia  Catholic Church in Iraq told 20/20 on December 18.

In terms of sheer numbers, the suffering of the Rohingya Muslims is dwarfed by the plight of Middle Eastern Christians today. The New York Times estimates that after the fall of Saddam Hussein, the Christian population of Iraq alone shrank from around 1.5 million in 2003 to less than 500,000 now as many fled the country or were killed. Open Doors’ 2014 report noted that over 700,000 Syrian Christians have fled since 2011 when civil war began.

Many organizations have lobbied for the killings and displacement to be named a genocide and for the U.S. to offer her support to the persecuted.

The Knights of Columbus spearheaded a largely influential effort including a petition for America to “end its silence about the ongoing genocide against Christians and other minority groups in Iraq and Syria.”

The K of C sent a report to Sec. of State John Kerry requesting that he include the persecution of Middle Eastern Christians in his designations of genocide. The report listed dozens of war crimes against Christians, including such unspeakable acts as slaughtering 90 children.

A bill introduced by Rep. Jeff Fortenberry (R-NE) with 203 cosponsors requested that the atrocities committed against Christians and “other ethnic and religious minorities” be termed “genocide.” It has not yet passed either branch of Congress yet.

The European Parliament issued a paper called the “Systematic mass murder of religious minorities by ISIS,” and  least 60 UK Parliamentarians wrote a letter to Prime Minister David Cameron also asking him to classify the persecution with this term.

The United States’ own Commission on International Religious Freedom called on the U.S. government to designate the “Christian, Yazidi, Shi’a, Turkmen, and Shabak communities of Iraq and Syria as victims of genocide by ISIL.” It went on to urge American and world leaders to condemn and bear witness to the genocide and crimes against humanity.

“The hallmark of genocide is the intent to destroy a national, racial, ethnic, or religious group, in whole or in part.  ISIL’s intent to destroy religious groups that do not subscribe to its extremist ideology in the areas in Iraq and Syria that it controls, or seeks to control, is evident in, not only its barbarous acts, but also its own propaganda,” said USCIRF Chairman Robert P. George.

GenocideWatch also issued an appeal to the U.S. Congress from genocide scholars that the government declare a genocide.

Kerry himself wrote on Aug. 7, 2014: “ISIL’s campaign of terror against the innocent, including Yezedi and Christian minorities, and its grotesque and targeted acts of violence bear all the warning signs and hallmarks of genocide. For anyone who needed a wake-up call, this is it.”

Even Democratic presidential candidate and former Sec. of State Hillary Clinton said she considers the label to appropriately describe the massacres by ISIS in the Middle East.

The networks, however, are determined to speak no evil when it comes to Islamic terror. Whether it is Boko Harram massacres in Nigeria, ISIS offensives in Libya or mass sexual assaults by Muslim Migrants in Germany, the network gatekeepers are careful of saying anything that might whip up the liberal bogeyman of “Islamophobia.”

But the numbers add up. Despite what the networks report, the hundreds of thousands of Christians and other minorities killed, tortured, or displaced by ISIS are real. The persecution has grown to such proportions that to balk from naming it genocide would only be inconsistent.