From ‘BusHitler’ to Trump: The Nazi Card is a Lib Journalist Specialty

People of all political stripes are from time to time guilty of playing the Hitler card in their criticism of those across the aisle. But liberals get far more of a pass when comparing their opponents to one of probably the three most evil men of the 20th century (Stalin and Mao being the other two).

A popular target for Hitler comparisons lately is Republican presidential frontrunner Donald Trump. Slate magazine’s Isaac Chotiner interviewed Robert Paxton, an author on the history of fascism about “the ways in which Trump is and is not a fascist.” 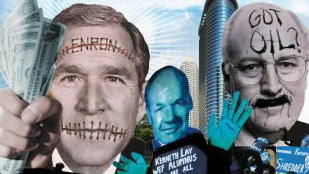 Fox News contributor Sally Kohn wrote in a commentary Wednesday that Trump is a “protofascist hatemonger.” The combined primary votes cast for Trump and Sen. Ted Cruz (R-TX) make the math start to “look a little too much like the early moments of Adolf Hitler's rise in Germany,” said Kohn.

Networks ABC and NBC have leapt to publicize the growing trend of comparing Trump to Hitler.

Saturday Night Live compared Trump’s supporters to racists and Nazis, which Fox News contributor Jedediah Bila said was unsettling since, “I think you can get away with it on SNL. … The problem is it seeps out from SNL and then you have commentators saying it ...”

Whether it started with SNL or not, it is out there.

ABC’s The View brought comparisons between Trump and Hitler to daytime television Monday, March 7 when several of the hosts agreed with the parallel.

“Absolutely,” Hostin responded, saying she was willing to compare Trump’s border security policies to genocide. Cohosts Michelle Collins and Joy Behar chimed in agreeing that Trump is reminiscent of Hitler.

CNN, ABC and CBS all mentioned the Philadelphia Daily News’ Dec. 8, 2015 cover comparing Trump to Hitler in the wake of his suggestion to ban Muslims from entering the United States.

The Atlantic’s Molly Ball said she sees “alarming similarities” between Trump and fascists. “Trump has gone full-blown Nazi on us,” Shaun King wrote in December for the New York Daily News.

Having raised the specter of a Trump-monogrammed 4th Reich, The Atlantic then dialed back a bit. “Trump’s xenophobic rhetoric, his demagoguery, and his populist appeals to citizens’ economic anxieties certainly borrow from the fascist playbook … But Trump is, fundamentally, a blustering political opportunist courting votes in a democratic system; he has not called for the violent overthrow of the system itself,” wrote former subject of fascism Gianni Riotta of Princeton University.

While plenty of conservatives have criticized Trump’s “strong man” style and even mentioned fascism, it is the left that made the Hitler/Nazi/Fascist smear acceptable political discourse during the George W. Bush administration. From anti-war demonstrators with street puppets and bizarre signage to sophisticated New York Times columnists, all the cool kids were accusing the President of the United States of totalitarianism.

MSNBC’s Keith Olbermann, infamous for his vitriolic attacks on conservatives said, “You’re a fascist … What else is this but fascism?” speaking about President George Bush’s push for telecom immunity. Elsewhere Olbermann accused Bush of “murderous deceit” in the war on Iraq.

(Contrast that with what Time senior political analyst Mark Halperin said on the network’s Morning Joe of an Obama press conference: “I thought he was kind of a d--k yesterday.” MSNBC  indefinitely suspended him.)

Cartoonist Charles Amsellem drew a cartoon in 2002 equating the German response to the burning of the German Chancellery Building with George W. Bush discussing 9/11.

Journalist and former political advisor to Al Gore and Bill Clinton Naomi Wolf wrote in The Guardian that the Bush administration was like Hitler taking the 10 steps necessary to close down an open society including invoking an external enemy (9/11) and controlling the press.

Wolf’s 2007 book, The End of America: Letter of Warning to a Young Patriot also drew parallels between the U.S. administration of the early 2000s and regimes of the early twentieth century.

At MSNBC, Chris Matthews loved making damning WWII comparisons during the Iraq War. Speaking with liberal filmmaker Michael Moore on MSNBC's Hardball July 23, 2007 about President Bush perhaps being guilty of war crimes Matthews remarked, “The Nuremberg Trials weren’t about the genocide, it was about waging an aggressive war.” Matthews repeated these comments on a March 22, 2013 special about Iraq: “You know, the Nuremberg trials were primarily, before the Holocaust and all those other issues, was against people who launched an aggressive war. And this [Iraq] was an aggressive war.”

When Guest Howard Fineman said on November 26, 2012 that conservatives view African Americans and Hispanics as a scary, alien force, Matthews responded approvingly, “The last guy to refer to the black auxiliary was Hitler.”

The View hosts, not known for keeping their opinions to themselves, have made several comparisons of Republicans to Hitler. “You have to put, like, a Hitler type [on the cover]," Host Joy Behar said in a discussion of Time magazine’s selection of “You” as “Person of the Year” was appropriate. “Like, you put [Bush Defence Secretary] Donald Rumsfeld there, or something,” she said.

I don’t think Adolf Hitler ever executed anyone. Did he? He never dropped the pellets of poison into, into the machine that then gassed the Jews. George Bush didn’t fly any of the airplanes that incinerated children. But will somebody, is it just a quantitative difference? Is there a qualitative difference here between George and any mass killer? If there is, I, I don’t see it. […]

Hypocrisy, thy name is Liberal

People on both political sides sometimes give in to the easy temptation to caricature opponents as Nazis, and plenty of conservatives reacted that way to Obama’s statist tendencies over the course of his presidency. However, the extreme reactions of liberals can only be hypocritical.

MSNBC anchor Chris Matthews is particularly inconsistent on Hitler references. Matthews lectured Republican Congressman Randy Weber for mentioning Hitler in a tweet about President Obama. “Wouldn’t it be good for the country,” he said, “if politicians drop the whole Hitler thing and returned to saying, ‘Well, we Republicans and those Democrats just have an honest disagreement on some big stuff?”

New York Times columnist Paul Krugman was just as careless in 2009 when he complained that Republicans were using the Nazi card. “Hitler comparisons are apparently rife at tea parties. What’s gotten into the GOP?” However, his book The Great Unraveling included a picture of Dick Cheney on the cover with a mustache reminiscent of Hitler and the words “Got Oil” written on his head.

Both sides should refrain from comparing elected representatives of the United States to the man whose name has become the byword for evil. But let us not forget who made invoking Nazism routine, and for which side the fascist sky is always falling.