Mic.com’s Zak Cheney-Rice rolled his eyes at frustration from parents whose kids were shown a racially charged cartoon meant to show the unfairness of white privilege. 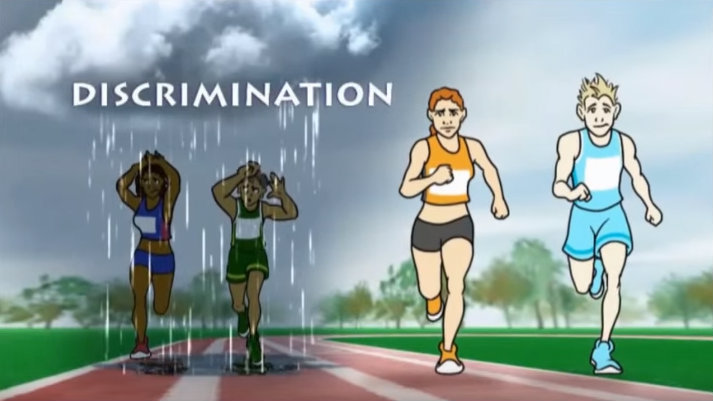 The 2010 cartoon by the African American Policy Forum symbolized racial inequality by a foot race showing white people getting many unfair advantages.

In the cartoon the white people start first and continue to pick up tokens symbolizing money and inheritance. A timer in the background starts at 1492, when Columbus came to America, and black runners start at 1964, the year the Civil Rights Act was passed.

“It's incredibly heavy-handed, and very clearly dated, but none of it is unfair, which makes some of the responses all the more puzzling,” Cheney-Rice said.

Some parents, guardians and others deemed it unhealthy for their kids to be made to feel guilty in this way, and some called it divisive and racist. The short was also was reportedly called a“white guilt” video, said some news outlets.

"They are sitting there, watching a video that is dividing them up from a racial standpoint. It's a white guilt kind of video," said Don Blake, grandfather of a little girl at Glen Allen. "I think somebody should be held accountable for this."

"[Martin Luther] King gave his life so that America would be a place where we are judged by the content of our character, not the color of our skin," said KYSS-FM radio personality Craig Johnson. "Now we have poverty pimps being led by our current president, Barack Obama, who, all they talk about is the color of skin."

The cartoon was also showcased by the Washington Post last week.

If Glen Allen’s screening of the cartoon was meant to foster a peaceful discussion about racism in America, it certainly did not succeed.