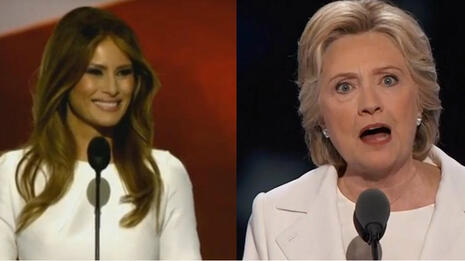 White is ok, so long as it’s worn by the Democratic nominee.

Two weeks ago, Philadelphia Inquirer fashion critic Elizabeth Wellington bashed Melania Trump for daring to wear a white dress for her RNC speech. Wellington acknowledged that “on a strictly fashion note,” Melania pulled off an “angelic look.” But the white designer dress was a “scary statement,” and supposedly gave off the subliminal message “that in the G.O.P. white is always right.”

Ten days later, Wellington changed her mind and decided that white was an ok color for politicians to wear.

When Hillary Clinton took the stage last week, also garbed in all white, Wellington had nothing but praise for her fashion choice. This time around, the critic wrote that “white is a hue that’s both soft and strong,” not scary. She went on to claim that “Clinton's white pantsuit is telling us she has arrived. This is surreal. A dream come true.”

Trump’s “all-white ensemble displayed the kind of foreignness that is accepted by her husband’s political party.” But Hillary? “She seemed happy. She sounded excited. She appeared hopeful. And that was all reflected in her clothes.”

Melania’s white dress told America that Donald Trump is a racist. But not Hillary’s garb! “Clinton's white suit told America loud and clear that she joyfully accepted the opportunity to run for president of the United States of America.”