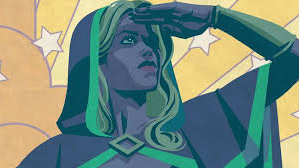 Here’s the latest step in the trans agenda, coming to a book store near you.

Meet Chalice, the world’s newest transgender superhero. The dude dressed in a miniskirt is set to be the central hero in the Alters series, a comic ironically about societal outcasts who end up with superpowers.

Most superheroes only have to conceal one secret identity. But Chalice makes his life more difficult by having to conceal two. Chalice is actually a male college student named Charlie Young, but begins transitioning to female, unbeknownst to his parents. One of his brothers has cerebral palsy and Charlie is afraid his gender crisis might further upset his family. Yeah, no kidding.

The series will feature a whole host of characters with some kind of mental or physical anomaly. One character is a quadriplegic; another struggles with PTSD. One story will be about an “unattractive heroine.”

The creator of the series, Paul Jenkins, is a veteran Marvel author, having written for the Spectacular Spider-Man, The Incredible Hulk, and X-Men Origins comics. He’s the son of a gay, single mom who provided much of the inspiration for the Alters series. The colorist for the series, Tamra Bonvillain, is a trans woman.

Although Jenkins insists that Alters will not be set of moral lessons on acceptance and tolerance, it will be just that by default. He describes Chalice as “only [able to] be herself when she’s not herself,” teaching readers that Chalice’s gender confusion is completely legitimate.

Although Chalice is not technically the first transgender superhero, he is the first to be a central character. He’s preceded by trans Alysia Yeoh, who was DC’s Batgirl’s roommate.

In a slap at the current bathroom debate, the debut issue of Alters, which hits shelves next month, will have a special surprise for its North Carolina readers. Although in the other 49 states the series cover will feature a profile of Chalice, in NC the front picture will be of Chalice sending greetings from the statehouse.

But as author Jenkins said, Chalice’s story isn’t meant to be political commentary. Nothing liberals do ever is.