Celebrities Flip Out Over Brexit Vote 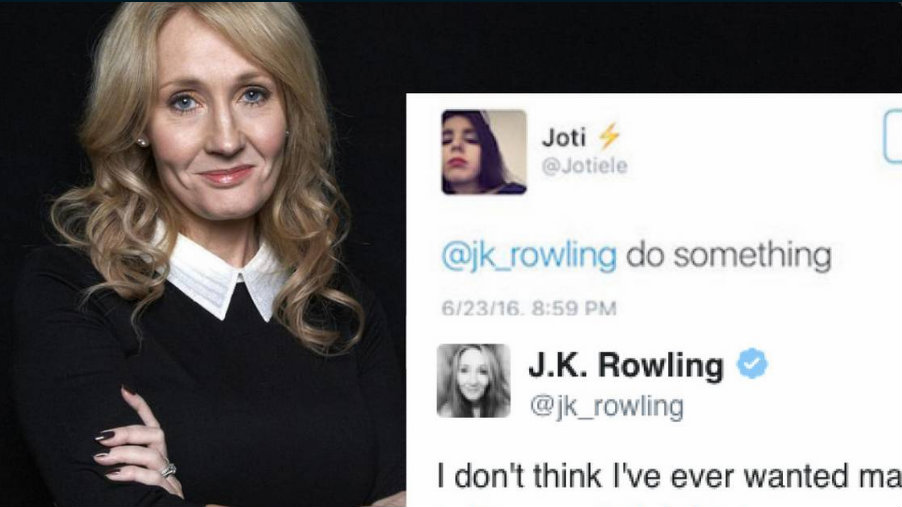 The sky is falling, the oceans are rising, the sun is exploding, all because the U.K. is breaking up with the EU. At least, that’s what it sounds like from reading the reactions of celebrities in the wake of the Brexit decision.

Harry Potter author J.K. Rowling expressed her dismay by tweeting out “I don’t think I’ve ever wanted magic more” and “This is what happens when you try and fix a faulty watch with a hammer.”

She was far from alone. The Late Late Show host, Brit James Corden, fears for the future of his children. His response was:

I can't get my head around what's happening in Britain.I'm so sorry to the youth of Britain. I fear you've been let down today x

Congratulations exiters. Reverse is across and down, easy on the clutch.

Those are the mild reactions. Other celebrities voiced their concerns in stronger terms.

Singer Ellie Goulding, known for pop songs such as “Love Me Like You Do” and “Burn,” actually whined like this:

I truly believe this is one of the most devastating things to happen during my lifetime. I felt a fear I've never felt this morning.

At last, we can now return to the good old days. Of isolation, rampant xenophobia & our poor dying young in terrible hospitals.

Cheer up. We'll all be dead soon and it's the next generation that will really suffer. Have a great day :)

Trevor Noah, host of The Daily Show, quipped that:

It's so funny that Britain is the same nation that spent all it's time convincing colonies not to leave because "strength in unity".

There are plenty of American celebs who wanted to get in on the action too!

Actress Lindsay Lohan decided to become a politico while the vote was going with a much-mocked Twitter rant about the importance of remaining in the EU. 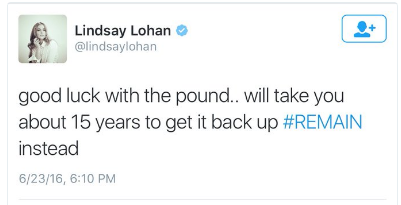 And after this less-than-brilliant question, it’s no wonder that Lohan has since deleted her Twitter diatribe:

"what would #MARGARETTHATCHER THINK OF #Brexit?"

And let’s not leave out the ever-endearing liberal nut Michael Moore, producer of such works as the anti-Bush film Fahrenheit 9/11:

Europe, u are better off w/o Brits! Now that there's a vacancy, take us! We want what Europe has: free health care, free college, real beer!