The Huffington Post has uncovered a fact that thousands of Biblical scholars and theologians have missed: Jesus was the first transgender man.

To HuffPo writer Suzanne Dewitt Hall, “the current flap in conservative Christian circles about bathroom access is a bit baffling.” She claims that God created transgenders in Genesis, after all.

But even worse are “Christians who claim to take the Bible literally. Of course they don’t actually do that,” she says; they “impose their own filters on stories and phrases to fit their particular ideology.” That’s not what Hall is doing when she claims Jesus was a transgender, not at all. 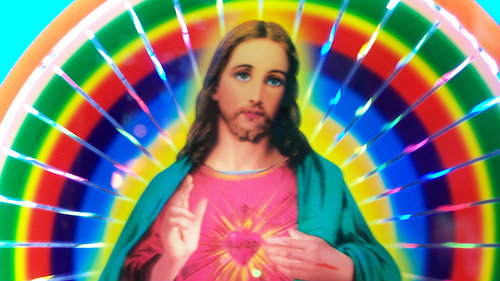 “The Bible tells us that Eve was the first example of human cloning,” as well as the first transgender woman. See, “God reached into Adam, pulled out a bit of rib bone, and grew Eve from that XY DNA into Adam’s companion. She was created genetically male, and yet trans-formed into woman.” Poof, transgenders were created. Rib bones are all that determine gender.

By Hall’s logic, if Mary was a transgender, then of course Jesus was too. “The Holy Spirit comes upon the second Eve, and the child takes flesh from her and is born… with XX chromosome pairing. Born genetically female, and yet trans-formed into man.”

The author also claims that “we don’t have a black and white God; creation is so full of color and variation that it’s incomprehensible how we Christians struggle to pare him down to the limited palette of our individual expectations.” When she tries to make the Biblical narrative fit her transgender agenda, that’s not paring the workings of God to her own expectations. Only conservative Christians do that.

Suzanne Hall, who lives with her wife in Massachusetts, is also the author of a children’s book, Rumplepimple. It’s an innocent story about a dog and his girl…. And her two moms.

The Huffington Post seems bent on convincing people that Jesus was anything but straight. One writer suggested that Jesus should be portrayed as a gay icon to support the homosexual movement. Another article portrayed a series of art pieces depicting “gay Jesus.”

Hall did some research on the word “trans”: “it means ‘across,’ ‘beyond,’ ‘through,’ and ‘changing thoroughly.’” The Bible is the most “trans” book of them all; it has been changed quite thoroughly by the Left.