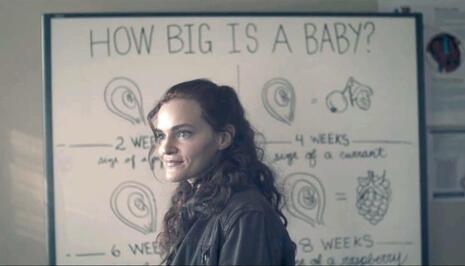 Hulu’s The Handmaid’s Tale has been especially useful for the left to defend abortion rights, so it’s only natural we finally get to a storyline defending abortion as a right. And just as predictably, it’s wrong, obnoxious, and makes no sense, much like most leftist policies.

The May 5 episode “Milk” gives us a flashback of the handmaid Janine (Madeline Brewer) before the United States was turned into a religious oligarchy known as Gilead. Back then, she was a single mother who unexpectedly became pregnant again. Not feeling ready to handle another baby, Janine goes to a clinic to have an abortion only to come across a crisis pregnancy center.

There, she doesn’t mince words about how upset she is at apparently being tricked while the volunteer has the nerve to tell her she’s capable of caring for her own baby.

Darla: Abortion is dangerous. I don’t want you to go through with it if you don’t have to.

Janine: Uh, well, I want to go through with it. That’s why I’m here.

Darla: Well, we don’t do them here.

Janine: What? Well, why the fuck would you have me come in here? What is this place?

Darla: Somewhere we can help you understand what happens when you choose abortion. They insert a tube into you and use it to tear the baby apart.

Darla: They pull it out piece by piece. And if a tiny piece is left inside, like a toe or a finger, the infection makes you infertile. Your body was made to keep that baby, not get rid of it. All women regret doing this, Janine. You think you’ll be fine. But no one’s fine after killing their baby.

Janine: You don’t know shit about me.

Darla: I know you're used to being underestimated, you think you can't do this, but you're strong, you're smart, and you'd be a great mom. You have no idea how much you would love this baby.

The show makes it clear in no uncertain terms that everything this volunteer did, from warning about abortion side effects to mentioning that Janine is capable of being a great mother, was wrong.

Janine later visits an abortionist and fills her in on what happened. The abortionist plainly states that all the warnings are “a bunch of crap” and crisis pregnancy centers “lie to women.”

Dr. Thomas: Do you want to be pregnant right now?

Dr. Thomas: And you’re comfortable with your choice? You’re making this decision yourself?

Dr. Thomas: Then the rest is none of my business. I am required by law to tell you that an abortion procedure can lead to an increased risk of breast cancer, infertility, and depression. And not by law, I’m also gonna say that’s a bunch of crap.

Janine: The other place made it sound like something really horrible would happen.

Dr. Thomas: Did you search abortion clinics online and end up there? They’re called “crisis pregnancy centers,” and they lie to women to convince them to keep unwanted pregnancies. I’m sorry you had to go through that. You take one now, and four tomorrow morning. You’ll have some cramping and bleeding. Maybe some fatigue and nausea. But if your symptoms last more than two days, I want you to call me.

Dr. Thomas: You already did the hard part.

First of all, depression and medical issues are most certainly things that can happen after an abortion, if this show is concerned about not lying to women. Second, crisis pregnancy centers are not evil organizations that lie to women, but actual volunteer centers that donate time and resources to help women at even greater numbers than Planned Parenthood.

Finally, even if these centers didn’t offer things like free ultrasounds or community support, the worst even this show can say about them is how they convince women to keep their unborn babies. That’s hardly the stuff of evil masterminds.

Most importantly, the entirety of The Handmaid’s Tale takes place in the middle of a fertility crisis. Protecting or even promoting the right to kill an unborn baby should be the last thing on any character’s mind with the survival of the human race at risk. Then again, if the show actually followed logic, it couldn’t be used as a propaganda tool for feminists, which is the sole purpose of this story.

Believe it or not, this was apparently the toned-down version of this story. Whichever way the story goes, the message is clear: abortion is good, crisis pregnancy centers are evil.