Philly Inquirer Op-Ed: It's Not ‘Wrong’ to ‘Compare Trump to Hitler’ 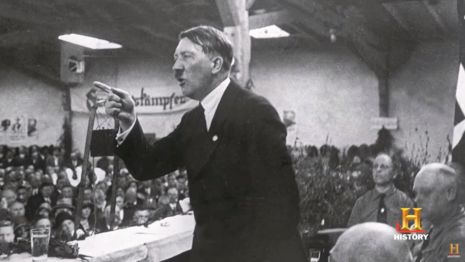 Talk about throwing Godwin’s Law out the window. This latest op-ed from the Philadelphia Inquirer goes so far as to compare Donald Trump to Hitler on Holocaust Remembrance Day. National unity is looking more and more like a pipe dream by the day.

On January 27, retired Inquirer editor David Lee Preston did his part in remembering one of the worst atrocities in humanity by, what else, comparing President Donald Trump to Adolf Hitler. His piece, aptly-titled “Is it wrong to compare Trump to Hitler? No,” dives straight to the point that yes, it is now okay to connect a former U.S. president to the Nazi dictator.

Somehow, I bet this controversial headline won't even garner a second glance by the staff who revolted this summer over an article titled "Buildings Matter, Too."

Many people find it offensive to use the Holocaust as a yardstick for the political excesses of the last four years that culminated in the storming of Washington on Jan. 6. They believe that to mention Donald Trump and Adolf Hitler in the same breath, as Spike Lee did on Sunday in an awards speech, disrespects the millions of innocent victims and survivors, diminishing the enormity of the Nazis’ crimes.

As a son of Holocaust survivors and a grandson of four murdered Jews, I might be expected to agree. But I do not.

Preston attempted to compare the two in broad and highly inaccurate terms such as the “child migrants in cages, Muslims banned from entering the U.S.” myths. By that logic, President Joe Biden could also be classified as Hitler considering he worked for the administration that built these “cages” and recently signed a travel ban from South Africa. Being the son of Holocaust survivors did not excuse Preston from leaving out facts.

His main source of comparison comes mostly from the Capitol Hill attack on January 6. Not only did he claim “Trump figuratively drove busloads of angry Americans to Washington this month and egged them on after they got there,” he also explicitly compared the day to Kristallnacht:

Now we have seen in our nation’s capital — indeed, in our Capitol — how Kristallnacht could have happened; and ultimately how men and women could devise what my father, George Preston, an engineer who survived Auschwitz and Buchenwald, called an “Industry of Death.” Now we have a way to understand the rise of a fascist dictator and the blind allegiance of murderous minions.

Are my fellow Americans who breached the barricades and broke into the halls of Congress different from the Germans who thought they were doing their patriotic duty by burning synagogues and shattering Jewish-owned shops in 1938?

Absolutely, yes, they are different! Once again, the Capitol Hill attack was reprehensible. What it wasn’t was a night of widespread slaughter and destruction targeting an oppressed minority. Any comparison of the two is disgusting, especially during a time when we’re supposed to honor the 11 million lives lost to the Holocaust, including six million Jewish people.

Finally, Preston tried to save face by stating that he’s not suggesting “that Trump would have become another Hitler, or that Trumpism is equatable to Nazism.” While that would be the bare minimum of courtesy, he immediately undermined it by ending with this: “Is it sacrilegious to suggest a link between Hitler and Trump? I don’t think so. I’d say it keeps us vigilant for the warning signs.” Basically, 'I'm not saying Trumpism isn’t Nazism, but Trumpism could be Nazism, so everyone can start comparing Trump to Hitler now.'