2020 is shaping up to be worse than 2019 if Netflix has anything to say about it. After releasing a gory fantasy just days before Christmas, Netflix kicked off the New Year with its religious drama Messiah. Let's just say the violence may have been preferable compared to this. 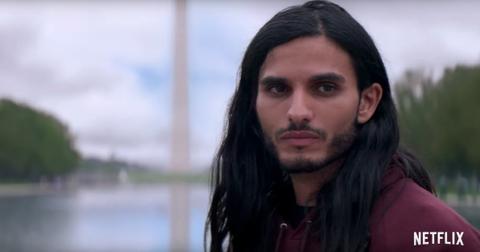 The show, which premiered January 1, attempts to answer the question of how the world today would react to the second coming of Jesus Christ. In this case, the alleged Messiah comes in the form of a Syrian man known as Al-Masih (Mehdi Dehbi) who sparks an international crisis after leading two thousand people to the Israeli border.

As he continues a pilgrimage throughout the world, the CIA attempts to learn more about the mysterious figure, his intentions, and whether he is truly the second coming of Jesus Christ. By the end of the season, we’re still unsure what to think, which makes the show that much more obnoxious.

It should go without saying that the series is controversial. In fact, it was controversial even before the series aired. The Royal Film Commission of Jordan, a country where Messiah filmed, previously had a demand that Netflix not stream the series claiming it infringes “on the sanctity of religion, thus possibly contravening the laws in the country.” Other predominant Muslim viewers noted that the name “Al-Masih,” which translates to “Messiah” in Arabic, also refers to the Dajjal, or the Antichrist, of the Islamic religion. Despite referencing religion, the series doesn’t seem to respect it most of the time.

Sadly, Islam isn’t the only thing insulted on this show. The show debates whether Al-Masih is the Messiah of Christianity, Islam, or Judaism, but the one thing that is constant is how terrible Israel is. The people Al-Masih lead to the Israeli border are left to nearly starve since the country refuses to take them within its borders. The Israel Police come off as bloodthirsty hunters as they attempt to catch Al-Masih, particularly an officer named Aviram (Tomer Sisley) who risks his job in his growing obsession.

The biggest target in this show would have to be country borders themselves. Demonstrated throughout the show, Al-Masih has no respect for borders. In fact, he pretty much condemns them. When Al-Masih makes it to America, he and his ACLU lawyer ask for asylum from Israel, claiming he would “be persecuted for his beliefs in Islam” if arrested. Considering 18% of the country’s population are law-abiding Muslims, it’s hard to think of a more bald-faced lie to hide the fact that he entered the country illegally and doesn't want to face the consequences. During his initial trial for asylum, he insists that “a border is an idea decided by the lucky.”

Garcia: My client fled the war-torn country of Syria with thousands of refugees hoping to seek shelter in Israel. But they were met with hostility and aggression by the Israeli government, who arrested my client without cause. My client is here as a refugee. If the Court decides to send him back to Israel, he fears he would be persecuted for his religious beliefs in Islam.

Judge Pleva: Is that your whole statement, Miss Garcia?

Judge Pleva: Does the respondent wish to make a statement?

Woman: No, Your Honor.

Al-Masih: I’d like to say something. No one decides where they were born. Our birthplace was decided by fate. You were born here. I was born there. What divides us? A border is an idea decided by the lucky. Today you sit in the seat of the fortunate. Just remember what put you there. Fate. What is fate but the hand of God?

America itself doesn’t make it through the show unscathed, either. Although the United States eventually provides “asylum” to Al-Masih, he openly criticizes America’s role in the world. In the eighth episode “Force Majeure,” the alleged Messiah speaks with the president, played by Dermot Mulroney, about his mission. Apparently, his mission includes demanding that America withdraws all troops worldwide, regardless of the circumstances. Although the president logically argues against this, Al-Masih still takes the leftist route of blaming America for everything.

Al-Masih: How far would you go to bring about a thousand years of peace?

President: I would do anything, but it is impossible.

Al-Masih: Not only possible but simple. Withdraw all American troops.

President: Are you serious?

Al-Masih: Bring them all home. Every man, every woman, every person. If you do this, you’ll be remembered as the president of peace.

President: This is…very naïve. Our troops abroad, for the most part, are a peacekeeping measure. To withdraw them would be disastrous. It would only encourage rogue states and marauding groups to strike.

Al-Masih: Where I am from, a hundred years ago Europeans drew lines on paper and called them borders. America has enforced those lines and give strength to brutal dictators. You know that to be true.

President: You can’t hold Americans accountable for the actions of other leaders.

It’s interesting to note that the countries this apparent Messiah lectures to change their sinful ways include Israel and the United States, of all places. I suppose focusing on a religious Messiah can only be good if the United States can be evil. What's worse is that the president eventually gives into the demand after a massive flood devastates Florida, believing he might be appealing to God.

Between this and depicting Jesus as a closeted gay man in a recent movie, Netflix is better off avoiding all religion in the future. That would be a great New Year's resolution.