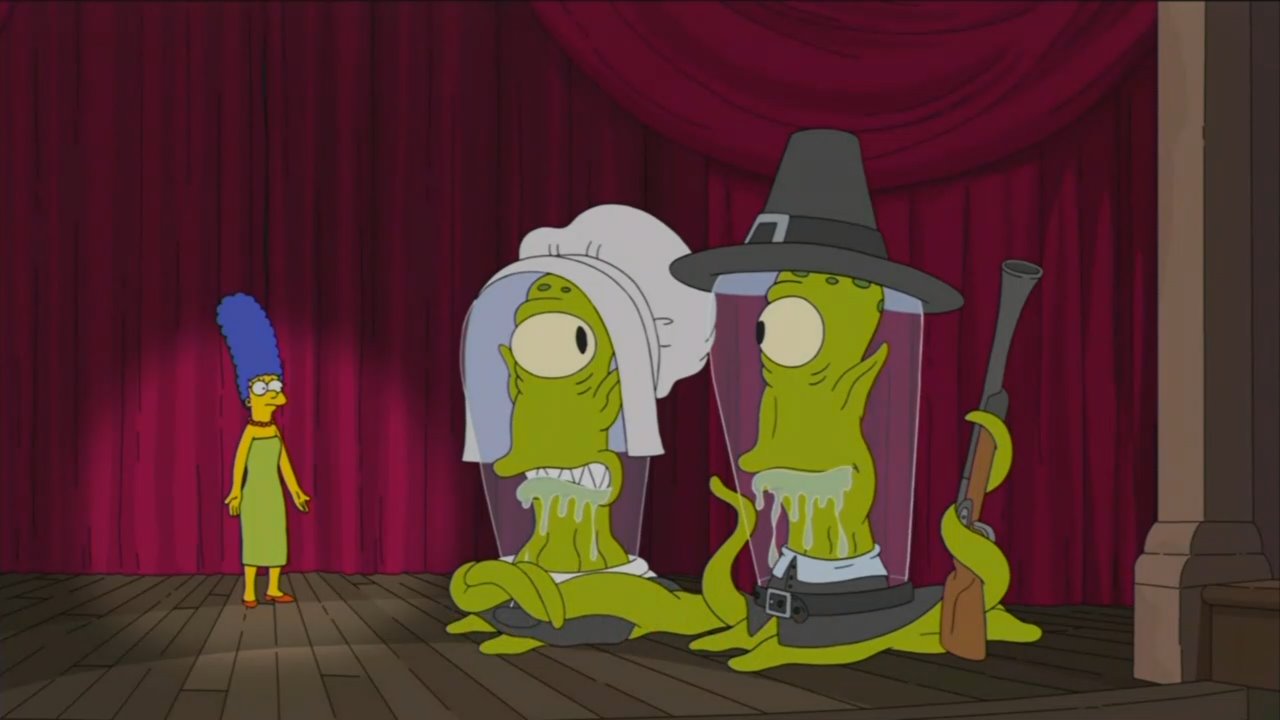 It’s officially the week of Thanksgiving, or as liberals like to call it “Genocide Day.” It’s practically a tradition as old as turkey to have leftist shows claim the holiday celebrates pilgrims killing innocent Native Americans. Fox’s long-running series The Simpsons keeps the sentiment going by reminding people that pilgrims were “oppressive colonizers.”

The November 24 episode “Thanksgiving of Horror” finds the series taking a more Halloween-themed angle for its Thanksgiving special. As Marge (Julie Kavner) explains in the opening, “The world has gotten so darn scary lately” that one holiday wasn’t enough to contain all the scares.

Case in point, Kang (Harry Shearer) and Kodos (Dan Castellaneta) show up ready to take over the planet dressed as pilgrims. After all, they deduce that’s “how oppressive colonizers dress” with which Marge, of course, agrees.

Marge: Good evening. Well, Halloween has come and gone but, you know, the world has gotten so darn scary lately, what with the grim specter of everything, that one holiday just wasn't enough to contain all the frights and chills. So this year the terror has spread into Thanksgiving.

Marge: Tonight, we're bringing you three spine-tingling and stomach-filling tales of Thanksgiving terror. It's pretty gruesome, so you might want to cover your kids' eyes. Ooh, you two have gotten into the Thanksgiving spirit.

Kang: Incorrect. We are taking over your planet. Is this not how oppressive colonizers dress?

Kodos: Now, what time is dinner?

Homer: No one knows!

At some point, people like these writers have to start realizing that the pilgrims were not genocide-friendly monsters. I would just settle for the writers realizing that calling pilgrims “oppressive colonizers” isn’t funny. After all, it’s far from the most original statement out there. Then again, I’m not going to The Simpsons for anything mind-blowing.