A show created by noted liberal producer Ryan Murphy that’s literally called The Politician was never going to be unbiased. Predictably, we get the usual leftist fanfare along with an obnoxious and downright hypocritical takedown of the white, rich, and privileged (it’s not like Netflix has a shortage of those) under Donald Trump.

The eight episode series, which premiered September 27, follows high school senior Payton Hobart (Ben Platt) who wants to become President of the United States one day. To accomplish that, he aims to attend Harvard, the top producer of presidents, by first running for student body president. What follows is a mess of scandals, revelations, and even some assassination attempts over the course of the election.

Although Donald Trump is never named in the show, he’s still clearly looming in the background. In the pilot, Payton discusses his POTUS goals with his high school dean. The dean responds glibly that it seems more like a hot job since “the air of impossibility has been removed.” In addition, the opening title sequence features a biography for each modern president besides George H. W. Bush, but, in place of Donald Trump, there’s a book entitled The Idiot’s Guide to Clowning (see below). This is featured in every episode. 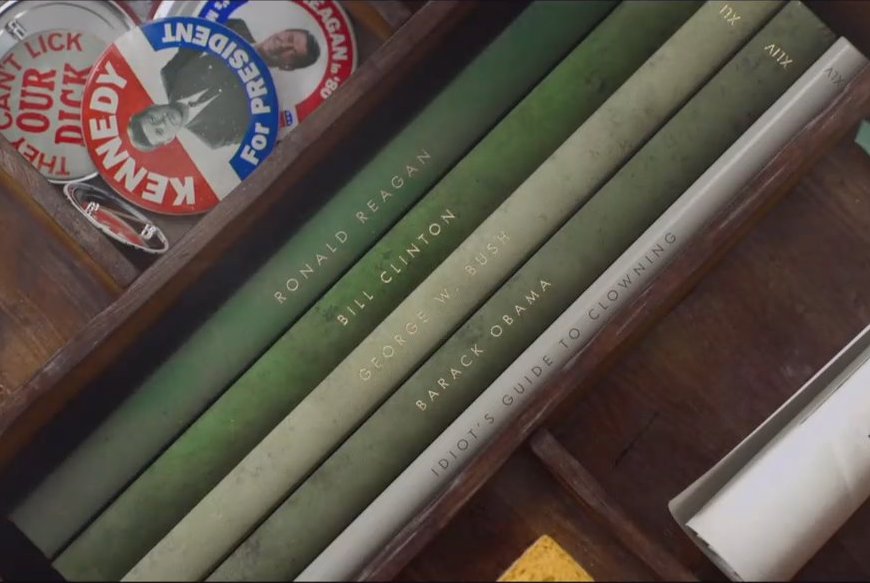 Since the show takes place in Santa Barbara, there’s also lots of blatant liberal pandering, sometimes openly. Payton’s rival gains some buzz by enlisting a student named Skye (Rahne Jones) to be the first “gender non-conforming” vice president of the school. Payton initially tries to overtake that by enlisting a disabled student as his VP to “soften” him up, though he notes, “John McCain tried that. It was a disaster.”

Payton’s platform also includes banning single use straws and shaming local gun stores, the latter of which includes the moronic move of Payton, a high school student, somehow buying out the store inventory to melt down the weapons. That’s particularly dumb on the writers’ part considering California prohibits the selling, supplying, delivering, transferring or giving possession or control of any firearms to anyone under 21 like Payton.

Even outside the school setting, there are anvils of liberal propaganda. In the finale, we jump ahead three years to New York City where we meet state senator Dede Standish (Judith Light) who vehemently argues against the well-documented concept that Roe v. Wade “was a poorly decided case” claiming that’s “an argument that the Republicans only landed on ten years after the fact when they realized that a constitutional amendment was never going to happen because roughly 70% of Americans support reproductive rights.” And that doesn’t even touch upon her three-way marriage with two other men.

Of course, the most prominent feature of the series is the supposed satirization of rich, white people "particularly under this president," like Payton’s obscenely rich family. Despite this show being part of a $300 million deal Murphy made with Netflix, I somehow doubt that he considers himself in this same category. Yet another opportunity for Hollywood figures to lecture us about how terrible rich people are while cashing major checks and patting themselves on the back.

In an interview with The Hollywood Reporter, Murphy even compares the plot of Payton’s wealthy mom Georgina (Gwyneth Paltrow) paying his brothers’ way into the exclusive Harvard to Jared Kushner’s father pledging $2.5 million dollars prior to his son’s admission. Of this, Murphy says, "This guy was walking around with the pride of being a Harvard graduate, and the reality was that he didn't belong there. I said, 'We've got to tell that story.'”

Even worse, he shows sympathy towards actresses Felicity Huffman and Lori Loughlin who were involved in the college admissions scandal. He comments on Huffman, who was actually convicted, “Do I agree with what they did? No. Do I understand what they did? Yes. I think it's all out of a love of your child, and I think that the system has gone so crazy. I have always liked her — and I believe in redemption and in second chances." Except for the Trumps and the Kushners, apparently.

At one point in the show, Georgina tells one of her spoiled sons, “The world is finished with entitled white men.” For the sake of seeing Ryan Murphy off television, I almost hope so.