During their morning and evening news shows, ABC and NBC refused to cover Planned Parenthood’s Oct. 13 decision to no longer accept “reimbursement” for giving aborted baby parts to researchers. 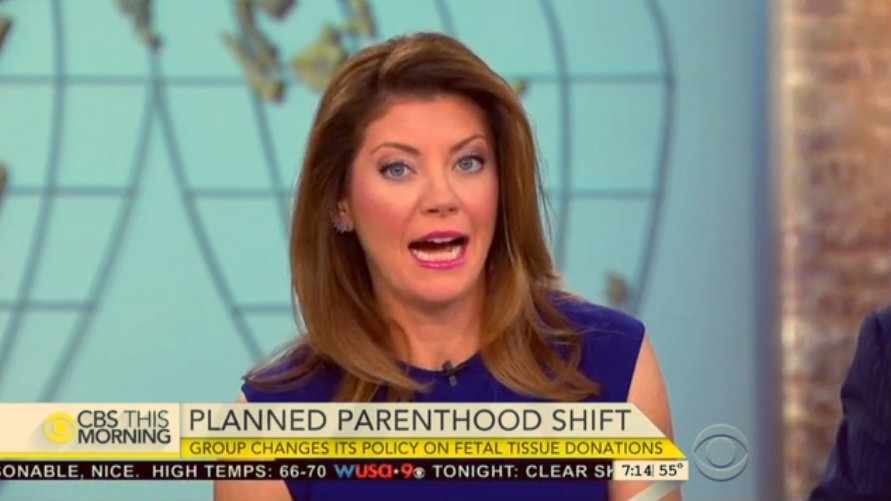 The decision came after months of controversy inspired by videos exposing Planned Parenthood’s harvesting of aborted baby parts from the Center for Medical Progress.

It’s not like the ABC and NBC could easily dismiss the move either. CBS reported on the policy change (albeit, briefly) and showed headlines from the New York Times, the Washington Post, the Hill, and Newsweek doing the same.

“Planned Parenthood is changing a controversial policy highlighted in a string of anti-abortion videos,” O’Donnell began. “The health care provider says it will stop taking money to cover the cost of donating fetal tissue to researchers.”

Refusing to call the Center for Medical Progress by name, she added, “One anti-abortion group calls the move an ‘admission of guilt.’”

Ironically, CBS This Morning also found time again for Cecil, the African lion shot by an American dentist in July. When the story of the lion’s death first broke, the networks covered Cecil more in one day than the abortion videos in two weeks.

Richards announced that her organization will no longer accept reimbursements for donating aborted baby parts to researchers in an Oct. 13 letter to the National Institutes of Health. She wrote:

“In order to completely debunk the disingenuous argument that our opponents have been using – and to reveal the true political purpose of these attacks – our Federation has decided, going forward, that any Planned Parenthood health center that is involved in donating tissue after an abortion for medical research will follow the model already in place at one of our two affiliates currently facilitating donations for fetal tissue research. That affiliate accepts no reimbursement for its reasonable expenses...”

If the money Planned Parenthood has been receiving for baby body parts were truly legitimate ‘reimbursement,’ why cancel it? This proves what CMP has been saying all along—Planned Parenthood incurs no actual costs, and the payments for harvested fetal parts have always been an extra profit margin.”