Planned Parenthood isn’t exactly a pro-child organization. Regardless, the media are fawning over this “smart” little girl after her media activist mother prompted her to talk about Planned Parenthood on camera.

Poet and activist Staceyann Chin and her 3-year-old daughter, Zuri, donned pink to show their support of Planned Parenthood during the abortion giant’s “Pink Out Day” Sept. 29. For the event, Chin created a video with Zuri entitled, “We Stand with Planned Parenthood!” In the four-minute YouTube vlog, Chin prompted her toddler to explain why they’re wearing “powerful pink.” And the media praised them for it. 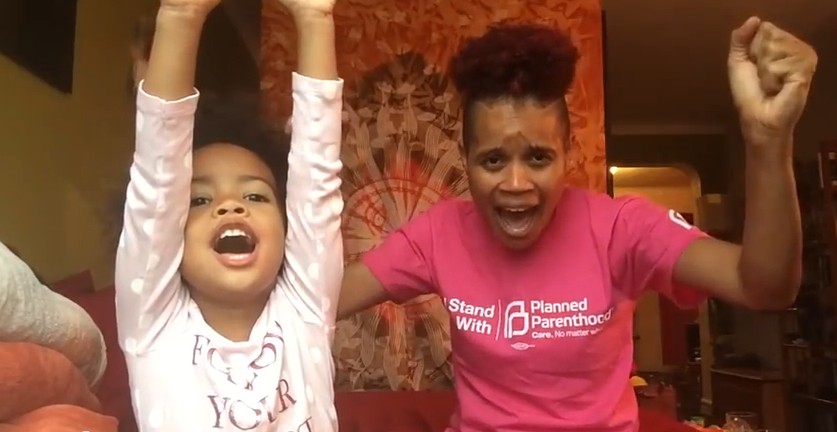 An LGBT activist and a self-described “lesbian artist,” Chin has been published by outlets including the New York Times and the Huffington Post. Originally from Jamaica, Chin now resides in New York.

The mother and daughter have made other YouTube “protests” in the past.

At the beginning of the video, Chin urged her daughter to announce, “we stand with Planned Parenthood.”

“And why do we stand with Planned Parenthood, Zuri? Do you know why?” Chin pressed her toddler.

“‘Cause everybody has a right to decide what they will do with their own bodies,” Chin clarified.

To describe what exactly a body entails, Chin continued.

“These are my elbows, this is my body, and inside my body I have uterus, and I have breasts, and they are my body to decide what I want to do,” she said.

Zuri inserted excitedly, “I have my little boobs.”

Chin agreed, “They are your little boobs, and they are absolutely your boobs.”

Although she got distracted while Chin gushed over Planned Parenthood, Zuri chanted at the end, “We need people to believe us.”

Chin encouraged her: “You are such a smarty pants, I love that about you. I love doing protests with you!”

But she wasn’t the only one – the media encouraged little Zuri as well.

Huffington Post staff writer Taylor Pittman cheered, “You go, Zuri,” in her Oct. 6 piece titled, “Toddler Gets Why We Need Planned Parenthood Better Than Some Adults.”

In the story, Erica Williams Simon commended “one the most adorable — and brilliantly simple — statements of support ever.”

“Zuri's words weren't just cute,” she wrote, “They were important” and “boiled down the debate over the value of women's health care and reproductive rights to a pretty simple affirmation of women's bodily autonomy: the right to own ourselves, take care of ourselves, and love ourselves.”

RH Reality Check praised the “adorable” Zuri and the “#ParentingWin.”

"We need people to believe us." So well said, Zuri. http://t.co/sSGYjGEObP h/t @staceyannchin for sharing this light with us. #StandWithPP

A few days after the video’s release, Chin announced that having Zuri made her “even more” “pro-choice.”

Having my own child made me even more committed to being #ProChoice. #HerChoiceIsParamount

She also told her Twitter followers she would make “NO apologies” for what she has taught her toddler.

I make NO apologies for telling my daughter she has a right to make decisions about her body: I want her to... https://t.co/1fqjMmkWJ4