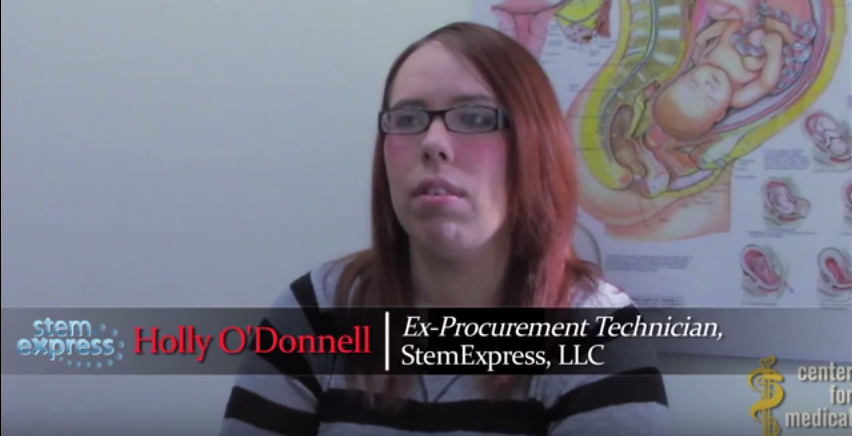 A horrifying new video shows exactly what Planned Parenthood does with the parts from aborted babies.

The Center for Medical Progress (CMP) released a third investigative video July 28 showing a former “procurement technician,” Holly O’Donnell, explain how Planned Parenthood would “get a certain percentage” of compensation from her former employer, StemExpress, for harvesting aborted baby parts. From her very first day at a Planned Parenthood clinic, a trainer instructed O’Donnell to pick apart an aborted baby and identify parts, including “a leg” with tweezers.

The video also caught another Planned Parenthood executive saying she wanted payment per baby specimen to see “how much we can get out of it.”

In it, Holly O’Donnell, a licensed phlebotomist who worked as a “procurement technician” at the fetal tissue company and biotech start-up StemExpress in 2012, revealed, “I thought I was going to be just drawing blood, not procuring tissue from aborted fetuses.”

O’Donnell described StemExpress as a “company that hires procurement techs to draw blood and dissect dead fetuses and sell the parts to researchers” -- while compensating Planned Parenthood.

“They partner with Planned Parenthood and they get part of the money because we pay them to use their facilities and they get paid from it,” O’Donnell said.

O’Donnell stressed the financial benefit StemExpress offers Planned Parenthood. “For whatever we could procure, they would get a certain percentage,” she said. “No one else really cared, but the main nurse did because she knew that Planned Parenthood was getting compensated.”

The technicians were asked to harvest “certain tissues,” O’Donnell said, including brain, liver, heart and “pretty much anything on the fetus.” She continued, “It’s basically human trafficking of fetal tissues.”

The procurement business, which she described as a “pretty sick company” makes money “based off the poor girls who half the time don’t even want to get abortions.”

But O’Donnell’s most sickening revelation came her very first day at a Planned Parenthood clinic, where she fainted after being direct to dissect an newly-aborted baby with tweezers.

“And then I see someone come in with a bottle of something and there was blood in it,” O’Donnell began. That person then “went over to the sink and they emptied it out on a strainer and put it on the pie dish, and lit it up.”

Her trainer, she continued, put on gloves and grabbed tweezers. O’Donnell next saw her trainer “picking the parts away from the vaginal tissue.” “And I’m -- I’ve never had anxiety before this at all,” O’Donnell said, “so I’m looking and I don’t know what’s going on.”

But her trainer soon told her what was happening: the pulling apart of baby pieces. “[The trainer is] like, okay, well this is the head, this is the arm, this is a leg,’ and she hands [the tweezers] over,” and said, ‘Oh, here you go, can you show me some of the parts I just showed you?’” O’Donnell described.

“And the moment I took the tweezers, I put them in the dish, and I remember grabbing a leg and I said, ‘this is a leg.’ And the moment I picked it up, I could just feel like death and pain.”

O’Donnell soon discovered she wasn’t the only one with a bad reaction to the practice of dissecting aborted baby parts.

After blacking out, O’Donnell explained, “[O]ne of the nurses looks at me and is like, ‘Oh new, you’re new, huh?... Don’t worry, it still happens to a bunch of us.” The nurse added, “Some of us don’t ever get over it.”

O’Donnell reacted, “And I remember leaving that day like, ‘What have I got myself into?’”

The video also showed a clip of the Vice President and Medical Director of Planned Parenthood of the Rocky Mountains (PPRM) in Denver, CO, Dr. Savita Ginde. Located in a Planned Parenthood pathology laboratory where aborted babies are gathered, Ginde said she preferred payment per organ while trafficking aborted babies. “I think a per-item thing works a little better, just because we can see how much we can get out of it,” she said.

According to CMP, PPRM is “one of the largest and wealthiest Planned Parenthood affiliates and operates clinics in Colorado, New Mexico, Wyoming, and Nevada.”

Also in the video, Dr. Katherine Sheehan, Medical Director emerita of Planned Parenthood of the Pacific Southwest in San Diego, admitted her affiliate’s connection with Advanced Bioscience Resources, a “middleman company” that provides aborted baby parts, according to CMP.

“We’ve been using them for over 10 years, really a long time, you know, just kind of renegotiated the contract,” Sheehan said. “They’re doing the big government-level collections and things like that.”

The video, following on the heels of last week’s video with Dr. Mary Gatter, is part of CMP’s investigative study, “Human Capital.”

The liberal media raced to defend Planned Parenthood after CMP released its first video. In the first 9 hours and 30 minutes of news shows broadcast after the story broke, ABC, NBC and CBS, spent only 39 seconds on the first video. It took more than 24 hours before all three covered the story. In the week after the first video, the networks gave a mere 9 minutes and 11 seconds to the story (in contrast, the networksdevoted more than three times that to the Susan G. Komen controversy, when the charity temporarily decided to defund the abortion giant).

Will the media prove as hesitant to report on this latest video?

In a press release reacting to the third CMP video, the president of Students for Life of America, Kristan Hawkins, challenged, “How numb one's conscience must be to say this is ok, to blame the messenger.” She added, “If the media allows the truth to be seen, this will be the end of Planned Parenthood and beginning of the end of abortion in our nation.”

As the National Director of Priests for Life, Fr. Frank Pavone commented in another press release that “America will not reject abortion until America sees abortion. The video footage released today gives Americans yet another opportunity to do precisely that.”