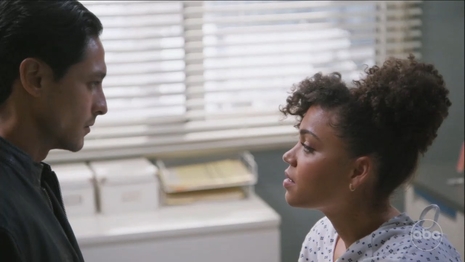 It’s not every day that the question of wine selection to accompany an abortion is brought up in a tense moment at an abortion clinic, yet here we are. One ABC drama thought running an abortion story during Lent was a good thing to do.

Victoria Hughes (Barrett Doss), a firefighter known as Vic on ABC’s Station 19, finds herself pregnant while she is on the outs with her boyfriend, Theo Ruiz (Carlos Miranda). At first, she wasn’t even going to tell him about the pregnancy but she decided to do the right thing and tell him. She told him she chose abortion over going through with the pregnancy, not even bothering to ask Theo his thoughts on her decision.

It's a special kind of selfishness that draws a woman to think it isn’t the right of a baby’s father to know about a pregnancy. Theo still has feelings for Vic, though, and he accompanies her to the abortion clinic.

I love a good show tune as much as anyone, but c’mon, that was weird.

As Vic and Theo wait for the first dose of the abortion drug Mifepristone to kick in, Vic inquires about what wine pairs best with an abortion. She was trying to joke to once again relieve the tense situation.

Vic: Well, I'm not really sure what one talks about when they're waiting for their abortion to show up

Carina: So, um, I'm gonna have to do a vaginal ultrasound one last time.

Carina: And volume off.

Vic: Okay. ♪♪ How lovely to be a woman

Vic: The wait was well worthwhile. ♪♪ How lovely to wear mascara ♪♪ ♪♪ And smile a woman's smile ♪♪

Vic: Okay. Any chance you were super wrong and there's nothing in there?

Carina: You're officially at five and a half weeks. What I'm gonna give you now is mifepristone. What this does is stop any growth in the pregnancy immediately. And because of your recent medical adventure... I would like for you to hang out here for one hour. I want to check your blood pressure before you go home. Okay?

Carina: Also, page me if you feel sick at all. If you vomit, you risk to lose the medication before it takes effect.

Carina: I'll be back in a bit.

Vic:  So, what wine do you think pairs best with an abortion? I'm thinking, like, earthy red, right?  It's gotta be.

Theo: Vic. Stop. Hey. It's just us. Okay? You don't have to do your jokey thing.

Theo takes Vic home and watches over her as she takes the additional abortion medicine, Misoprostol, several hours later. Theo talks about the two books he read to prepare for the abortion and its aftermath. The viewer can easily get the impression that he would have wanted the baby but he tells Vic otherwise when she finally asks about his thoughts.

Theo tells Vic about his mother and her abortion. She was pregnant when his father, a police officer, was killed in the line of duty. He said his Catholic mother was so distraught that she decided to abort the baby. Theo’s aunts stopped speaking to her for committing the sin of abortion and his mother never forgave herself. Theo ended his story by using the Bible to excuse his mother’s decision. That is what pro-choice people do when they know that they are doing something morally wrong.

"In the actual Bible," Theo said, "Jesus is forgiving.”

And he used a Bible quote, too.

The most disturbing part of Vic’s abortion story is how nonchalant she is about abortion. She told Theo that when she began having sex, she thought if she got pregnant, she would “just sprint straight to the abortion clinic, no question, but this is…I don’t know. This is hard, it’s harder than I thought it would be and the hard part (the actual abortion) hasn’t even started yet.”

Her younger self turned into a conflicted older woman. Yet, she went through with the abortion anyway.

Conservatives fight back. Let the sponsors of this show, T-Mobile, Disney, and Hulu, know how you feel.