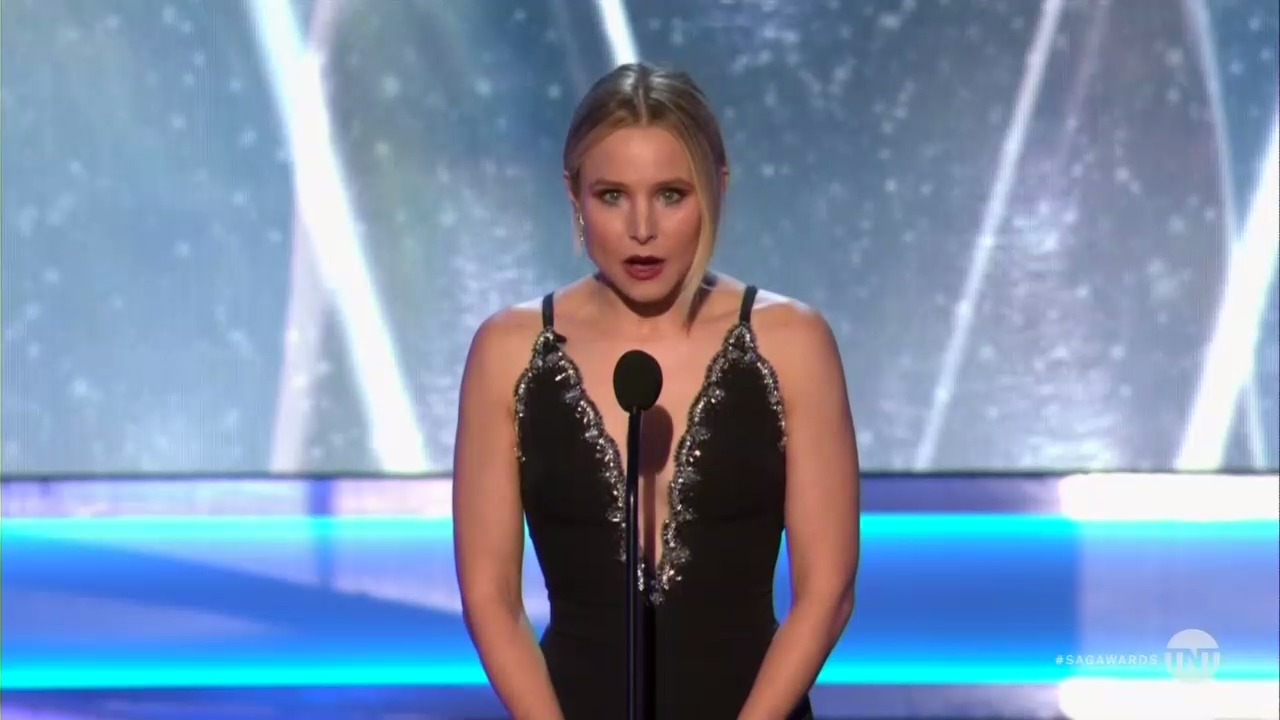 The 24th Annual Screen Actors Guild Awards aired January 21 on TNT and TBS and it was all about the ladies - from First Lady Melania Trump, to the #MeToo women. For the first time, the awards show incorporated a host, actress Kristen Bell, and a decision was made in advance to only use female presenters. Men were relegated to second class status, only helping to present the nominations of ensemble awards.

In the opening, Bell noted she is the first host and a woman, so she dubbed herself the "First Lady." As her pet initiative, she chose cyber bullying because she said she’s seen little work done. Oh, how clever! Mocking the real First Lady while this show was touted as all about supporting women. Friendly reminder from Hollywood – conservative women don’t matter. #NotUsToo

Bell went on to refer to The Handmaid’s Tale as “a documentary” and said, "The cast from the [race-themed horror] film Get Out is here serving as a walking reminder that if you say yes to the Tea Party, you're immediately on your way to the sunken place."

As Maya Rudolph came out to present Best Male in a Comedy Series, she said to Bell, “I love your show about living in hell. What’s it called?” Bell replied, “2018.”

William H. Macy won that award for Shameless and decided to insert his opinion on truth, that somehow pretending to be someone else as an actor gets to the truth. #FakeNews

A couple of years ago I was privy to a conversation where my friend David Mamet, who was my mentor and taught me everything I knew, was talking to a journalist and the journalist said actors have a weird job. We tell lies for a living. And Mamet said no, no, an actor's job is to tell the truth. After a confused conversation, the journalist finally said, well, I think we're saying the same thing. But they weren't. And even though our lines and the stories we're told are given to us by writers, it's our job under those imaginary circumstances to find the truth. I think it's a glorious way to make a living, especially in this day and age when so many people can't either recognize the truth or don't think it's important.

Morgan Freeman was honored with the Lifetime Achievement Award. At the end of his thank you speech, he made a reference to the design of the SAG Award, which is a statuette of a naked man: “Oh, and one more thing. I wasn't going to, I wasn't going to do this. I'm going to tell you what is wrong with this statue. It works from the back. From the front, it's gender-specific. Maybe I started something.” Maybe now we will see a new award next year #TimesUp.

The very end of the show produced a newsworthy announcement from actress Brie Larson. She told the audience that a new code of safety on set has been made for actors - "We're excited to say, with collaboration of Time's Up and your union members in this room, there is a new code of conduct to make sure there is a code of safety on set so we can do the strong and brave performances that we have seen brief glimpses of tonight."

It should be noted that James Franco and Aziz Ansari were nominated for awards before their names became associated with sexual harassment/abuse stories. Neither won, though, and only Franco was present in the audience. I have to say I was promised a historic show with all this female power but I ended up being a bit disappointed.