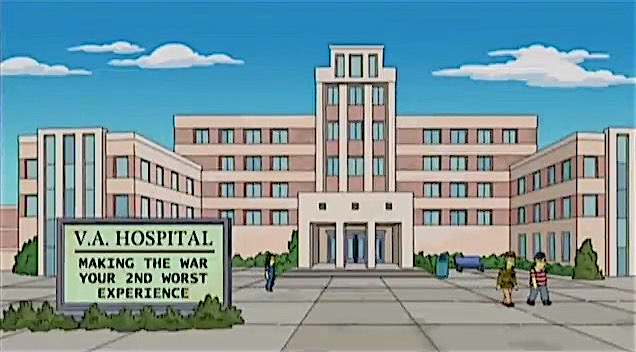 In “Havana Wild Weekend,” Fox's The Simpsons on Sunday was rife with shots at the Veterans Administration and historically referenced zingers to life in today’s Cuba.

Eighty-six year old Grandpa Simpson is put out on the street by the nursing home. Seeking an exam at the V.A. hospital (America’s shame), Grandpa gets a taste of their infamous wait lists and is told his appointment will be 23 years from now. The family decides to go to Cuba for inexpensive medical care.

Marge: We’re not beaten yet. Grampa, you're a veteran of every branch of the service. The VA hospital will help.

Lisa:  Aren't those hospitals the ones they called "America's shame"?

Homer: A lot of things are America's shame, honey.

Doctor: Uh, this is just the waiting room. Oh... Well, don't worry, the veteran's administration will take care of this proud warrior. I can see him in five minutes 23 years from now.

Veteran: Hey, soldier. Are you looking for high quality health care at no cost? I know the place.

Grandpa: Tell it to me in an anecdote.

Veteran: Years ago, I saw action in the Bay of Pigs.

Veteran: Those Cuban doctors patched me up good, and for a lot less.

Grandpa: How much less?

Grandpa:  I don't want to go there, now that that commie Trudeau is in charge. We're Goin' to Cuba!

Homer: You got it, Dad. Nurse, cancel our appointment.

Nurse: I'm sorry, there's a fee if you don't cancel within 24 years.

The family is allowed a journalist’s visa as Lisa is a reporter for her student newspaper, after arriving on a ferry named Che Gue-Ferry. Marge holds a book titled “Cuban Escapes” by Elian Gonzales. The Cuban doctor tells Grandpa there is nothing he can do for him, he says all he can do is give him a tropical shirt and asks that the family return it when Grandpa dies. Nothing is really ever yours in a Communist country, you know.

Grandpa experiences a Cuba-gasm when he rides in a 1950’s car and feels like his old self. Turns out the cure for old age, Cuba style, is experiencing memories of life in the 1950’s. The memories brighten up a old person’s outlook on life, but he still has no health care. So much for the miracles of “free” medicine in a Communist country stuck in a past decade.