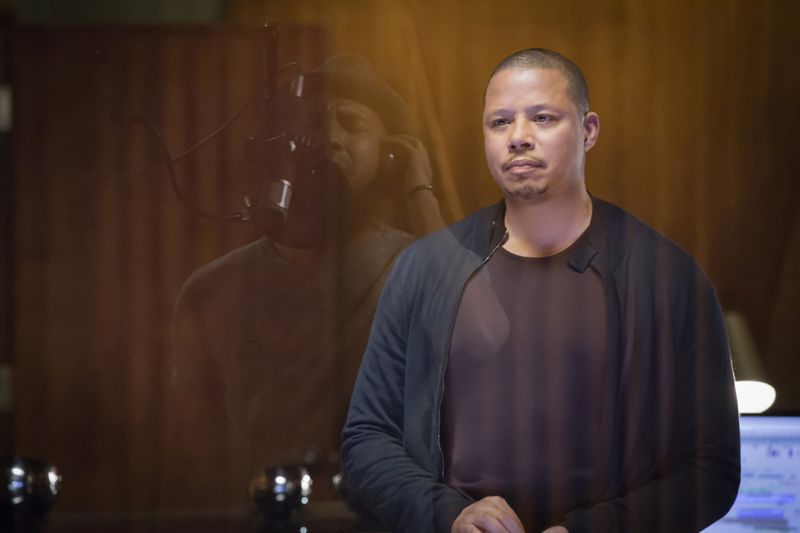 In “A High Hope for a Low Heaven,” Fox’s Empire focuses on marketing both Jamal Lyons (Jussie Smollett) and an up-and-coming rapper named J. Poppa.  It’s all about the Benjamins, you see, and there’s money to be made from both the LGBT crowd and the religious folks, too.

Jamal is not thrilled that his father, Lucious Lyons (Terrence Howard), is marketing him as a gay artist.  He prefers to be known as an artist who is gay.  Luscious doesn’t see the difference so Jamal brings in outside help.  He hires Jameison Hinthrop, an activist in the LGBT movement to take over the marketing of his music.  Turns out, Lucious knew Jameison from back in the day and this is a bit of sweet revenge for Jameison.  On the verge of signing up Jameison with Empire Music then, Lucious backed out when he found out that Jameison is gay. Imagine the laugh Jameison gets now that he will be working with Lucious’ gay son.

Lucious: Why is Jamieson Hinthrop in my studio?

Jamieson: Your brilliant son asked me for help reaching the heights that he so richly deserves. You do want that, right?

Lucious: D-don't worry about what I want or what my son wants. You know what, I didn't need this clown in my life. You don't need him in yours.

Jamal: What is this?

Jameison: Your father almost signed with me after he left Beretti. Till he found out I was gay.

Lucious: Exactly. That's why you don't need him. You don't even work with artists anymore, do you? You're just a rich dude that throws these lavish parties and tries to manipulate political candidates.

Jameison: That's right, Lucious. I am devoting the rest of my life to making the world a better place for LGBT people. And I want to help you, Jamal.

Jamal: And he's on the board of the Staples Center, Dad.

Lucious: Look, Mal, there's all kinds of vampires in this business. Some suck your blood, others will suck your...

Jameison: The day I found out that Lucious Lyon had a gay son is the day that I knew, I knew right then and there, that there was a God.

Jamal: Okay, see, nuh-uh. All of this back and forth is not gonna go down. Whatever issue that you two have with each other is between the both of you, okay? Jamieson, I brought you on board because Empire is marketing me in a niche way. Yeah. Dad, I have to undo that. Period.

Jameison: I say we put the past behind us. Jamal is a major talent, poised to break all kinds of barriers, and I would be honored to use all of my influence to help pave that way.

So, as Jameison makes the LGBT world a better place, Dre Lyons (Trai Byers) has found a disciple. Newly baptized and all about religious messages, Dre finds his man in rapper J. Poppa. The ‘J’ in his rap name is for Job. Like in the Book of Job. The rapper is happy to oblige as Dre explains that a religious background – J. Poppa is the grandson of a preacher – can be inserted into rap music.

Dre: So, J Poppa, instead of asking questions, let me just cut to the quick. I'm assuming the "J" in "J Poppa" stands for "Joints"? "Jewels"? "Jigga"?

Dre: As in the Book of Job?

J Poppa: "I know that my redeemer lives, and that, in the end, he shall stand on the Earth." Job 19:25. I'm a pk. Well, actually, I'm a Preacher's Grandkid. So that's where the "Poppa" comes from. A man's gotta show some love to Granpoppa for keeping me off the streets and letting me work on my music.

Dre: You ever think about incorporating the Word into your music? You could reach a lot more people with the light than you can with the darkness, brother.

J. Poppa: Are you for real?

Next, Dre has to let Lucious know that Empire Music has a rapper with a religious message onboard.  That happens during a live performance as Lucious hears some lyrics sung by J. Poppa.

♪♪ So I can hear 'em talking' ♪♪
♪♪ Wishin' I fall off, no limit on my card ♪♪
♪♪ So they know that I ball hard, for I do not ♪♪
♪♪ Understand what I do ♪♪
♪♪ For what I want to do, I do not do ♪♪
♪♪ But what I do not want to do, I agree that ♪♪
♪♪ The law is good, and I put that on my hood... ♪♪

Becky: What the hell was that?

Lucious: That's what I want to know. What in the hell is that?

Dre: That's Romans 7, verse 15 through 16. My man. Look at that-- the bloggers are loving it.
Becky: With all due respect, Lucious, I don't think that Andre understands the philosophy of the label.

Dre: Doesn't sound like there's any respect in that at all, Becky.

Lucious : Wait a minute, are you making your decisions from a Bible or from a business degree?

Dre: It's purely business, Pop, I assure you. Look, I didn't force him to do anything he didn't want to do, okay?
♪♪ Control my energy and effort ♪♪
♪♪ So this year I'm finna bring the pressure, come on... ♪♪

Jamal: Yo, Dad. I'm going to a little party at Jamieson's-- you want to roll?

Lucious: Hell, no. Been there, done that.

Empire Music exploits both sides of the aisle.  Lucious is all about the money, so Jamal brings in the LGBT money and Dre brings in the religious community’s money.  How’s that for a diversified bottom line?