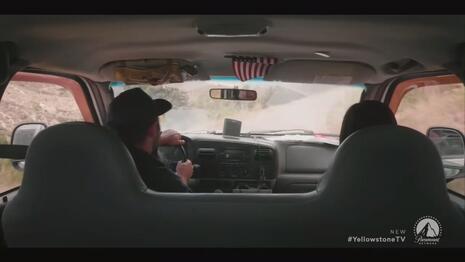 Monica Dutton bravely helped discover a rapist and murderer of Native American women in this Sunday’s Yellowstone. The unnamed man who had been preying on reservation women turned out to be a white, natural gas worker who would offer them a ride when their cars broke down.

Making white people and energy companies look evil is a two-fer in the liberal Hollywood playbook. But it was impossible to tell if the producers were smearing patriotic Americans or using the American flag tucked into the truck visor as a symbol of American oppression of Native Americans at large.

This week, she helped him and the reservation police set a trap and execute the killer. Monica staged a car breakdown and got picked up by a man in a truck that reads “Turek Natural Gas.” He said he’d take her to town, but instead veered off the main road claiming to know a place with cell phone service.

Once there, he ordered Monica out of the truck. She ran across a field clearly terrified, but he caught up and pinned her obviously intending to rape her. Just in time, Rainwater’s driver Mo, who is apparently also a sniper, put a bullet through the man’s head. When they combed the area for more evidence of the dead man’s crimes, police found multiple sets of remains.

Finding justice is rarely so straightforward.

Violence, disappearances and murder of Native American women is a true crisis. It’s a complicated one hindered by remote locations, lack of legal protections, competing jurisdictions, lack of sufficient data and neglect. Domestic violence against them is also widespread. In 2016, The National Institute of Justice found that more than half of Native women experienced physical violence by an intimate partner. Rates of psychological aggression by an intimate partner were even higher (66%).

The Trump administration launched a federal task force in late 2019, to try to improve coordination and data collection between federal agencies to address the crisis. Congress also introduced two new bills in 2019.

Also in this week’s episode, “I Killed A Man,” the fight between Beth Dutton and Market Equities CEO Willa Hayes got uglier. Beth had been shorting Market Equities stock so long it influenced New York traders and the hedge fund was suffering. Hayes hit back this week gobbling up shares of the investment firm Beth works at as the two tried to destroy each other.

After Beth lost, she finally told her father John that the only options are to sell Market Equities the land it wants or the company will succeed in getting Montana to condemn the land and sell it under eminent domain. And then others will continue to do the same until the ranch is gone, or property taxes have taken all their savings and forced them to sell the ranch off anyway.

“And just like that, seven generations of our family legacy will be carved into little ranchettes, where people will spend the summer wondering what this place looked like before they got there when it was ours,” she lamented.

John said he didn’t doubt her assessment, but he can’t sell because he promised his father he wouldn’t.