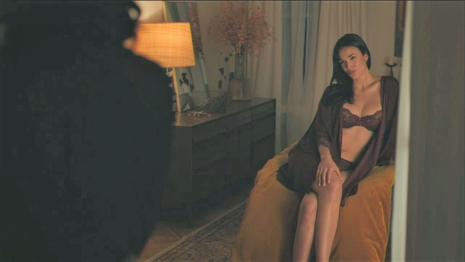 Cat is a sociology professor who favors decriminalization of prostitution, which she insists must be called “sex work,” because “prostitution suggests something criminal, immoral, deviant.”

Chuck, trying (as always) to destroy Bobby Axelrod, came to Cat for help this week. He needed her to explain the argument for decriminalization and how to “shred it” so he can force the Manhattan district attorney to give him back his art fraud case against Axe. She agrees to help him understand the issue, but issues a threat of her own that their relationship will be over, if he officially opposes any decriminalization effort.

“You can threaten the D.A., but if you make good on that threat, your library privileges will be revoked. Along with all the other privileges. Capisce?” Cat warns.

Chuck takes that knowledge and gets really “ugly” with the D.A., saying he’ll link sex work to human trafficking and then “Incarcerate them, stigmatize them and fucking damage them.” She backs off so Chuck doesn’t have to follow through on his threat.

Later he drops by Cat’s apartment and admits he was vicious. He tells her doesn’t know if he would have followed through if the district attorney hadn’t surrendered the Axelrod case to him.

Cat reminds him of her earlier threat saying, “then we couldn’t have enjoyed this,” as she leads him into a room with another woman dressed in lingerie.

Chuck: Is, uh, this a reward, or to teach me a lesson?

Cat: Both. Neither. Whatever we want to make of it. Come on.

The theme of the episode as well as the fact that the woman just sits in the bedroom waiting and is not introduced by name as a friend or lover implies strongly that she is a prostitute (presumably hired) by Cat as a surprise. Which is more than a little odd, since Cat advocated the Nordic Model of prostitution in an earlier conversation with Chuck. The Nordic Model decriminalizes sex for the prostituted and offers services to help people escape, but criminalizes buying of sex.

There was another problem with Billions' take on prostitution. Although the show portrayed Chuck’s perspective on the issue as wrong, there is a real-life connection between prostitution and human trafficking. A 2012 study cited by Harvard as a resource for journalists found countries where prostitution is legalized had higher amounts of human trafficking than places where it remains a crime. By portraying prostitution as an employment choice (which is blatant falsehood in every instance of sex trafficking victims), the show ignored the way prostitution exploits women and children and causes physical and mental health harm.

That bombshell happened last season, when Chuck went public with his sexual practices, after being threatened with exposure by an enemy. By telling everyone it kept him in the election, but cost him Wendy who announced she was seeking a divorce this season. She considered the public announcement a betrayal.