ESPN’s finest social justice warriors Stephen A. Smith and Ryan Clark were at it with their race-baiting antics last Friday. 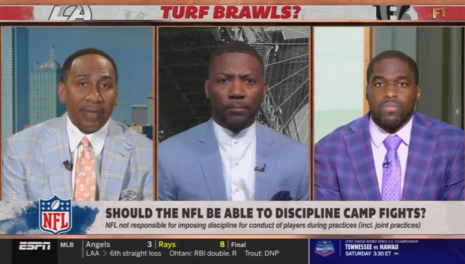 Both men were discussing a brawl that broke out at a joint practice between the Cincinnati Bengals and Los Angeles Rams last Thursday. These two teams squared off in last year’s Super Bowl, with the Rams winning 23-20, so it’s not surprising a fight did break out.

During the practice, Rams defensive tackle Aaron Donald was seen violently swinging two Bengals helmets at multiple people in a crowd, ending the practice in that moment and causing Donald to have to be restrained.

Naturally, this type of behavior should warrant some sort of punishment. Fights happen in practice all the time, but Donald’s actions were simply unjustifiable and he could have seriously injured numerous people.

Numerous sports reporters called for Donald to be suspended, including Geoff Schwartz who called the actions “out of control and dangerous.”

Fights happen. We know that and accept it. However, swinging a helmet is out of control and dangerous. He should be suspended https://t.co/5wVA7yeCPN

Do you see anything racist about his assessment of this incident? Don’t feel bad if you don’t, because there isn’t a shred of racism to be found.

Unless, of course, you’re Smith and Clark.

Both of these men claimed that because white journalists dared to criticize Donald - a black man - for acting like an idiot, they were treading into dangerous territory and were beginning to speak racist untruths.

Smith added on to Clarks faulty and twisted logic.

"When you got white analysts talking that way ... about Black dudes, that's another level."

— ESPN's Stephen A. Smith slams racist undertones when some call Los Angeles Rams star Aaron Donald a criminal after he appeared to swing helmets at Bengals players during a brawl pic.twitter.com/gYcG54WMBW

“When you got white analysts talking that way and using that language about black dudes, that’s another level,” Smith said. “I’m not accusing any analyst of racism or anything like that. I’m just telling them how we take it … Whoever sent that tweet out and whoever thinks like that, now I want to see if you say that about the white dude that does it. Because if I don’t hear the same verbiage, if I don’t hear the same language if something like that happens with somebody white, now I’m looking at you with a raised eyebrow and saying, ‘what the hell you trying to say?'”

Related: NFL Called Aaron Rodgers a 'Conspiracy Theorist' for Saying the Vaccinated Could Get COVID

What makes this attitude and perspective on the situation so despicable is that he basically communicates that white people have no right to comment on how black people live their lives because they must be doing it from a place of racism. In doing so, we ignore the truth in statements like the one Schwartz tweeted (calling Donald’s action dangerous) and protect and justify the immature acts of black people because they can do no wrong.

All of this makes no sense. But at this point, can we expect anything different from ESPN employees?