Zambian women’s soccer star Barbra Banda is being ruled out for Africa’s Cup of Nations tournament because of high testosterone levels. 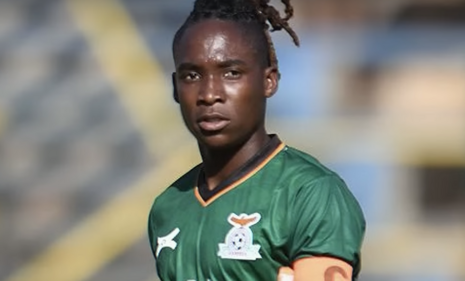 Yes, you read that right. A woman can’t play women's soccer because she - actually, he - has too many male chemicals in his system.

Banda would have had to take hormone suppressors as prescribed by the Confederation of African Football (CAF), in order to be eligible for the roster but refused, rendering him unable to participate in the tournament.

“Our medics engaged the players, and they weren’t willing to go through with it — I think there are possible side effects,” Sydney Mungala, the spokesperson for the Zambia’s Football Association (ZAF), stated. “With the players not going down that route and taking up that option, the final decision was that they could not be included in the final list for the competition.”

The 22-year-old star started turning heads in the 2020 Olympics, when he scored back-to-back hat tricks against the Netherlands and China.

The Zambian Football Association criticized the CAF for its decision.

"The Barbra case is just one example, but the broader picture is to strive to see how these regulations can be more responsible for the general situation -- not just Zambia,” Mungala said. "Many players can be affected by these regulations, and football is their livelihood. I think the CAF regulations are a lot more stringent [than Olympic regulations], and they put too much stress on testosterone levels."

Mungala and her colleagues can cry all they want, but there is a much simpler solution for this problem: don’t let men join your soccer teams.