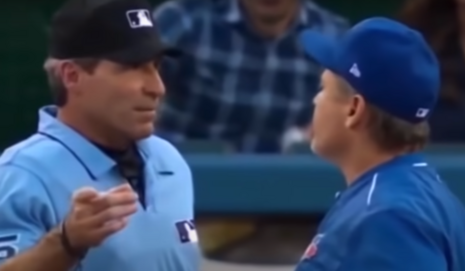 Ángel Hernández has a reputation for being a horrendously bad umpire  -- which he is -- but he thinks Major League Baseball is not allowing him to officiate in big situations because the league is racist.

Hernández and his lawyers are renewing a lawsuit they lost in 2021 against the MLB that alleges the league was racially discriminating against him because he had not been chosen to officiate a World Series since 2005, and had been passed over on several chances to be a crew chief (other than the 2020 season, when 12 umpires sat out because of the pandemic).

Unfortunately for Hernández’s camp, the idea that the MLB somehow exaggerated how bad he performed is a load of nonsense.

While it is very easy to say that a certain referee, umpire, or official is the worst within their sport, baseball players, writers, managers, and talking heads alike all agree that Hernández is objectively the worst official in the game.

According to Umpire Scorecards, Hernández ranks in the 25th percentile for call accuracy and in the 14th percentile for call consistency over the past seven years, which included the date range the lawsuit focused on. For a guy that has been calling games since 1993 and that thinks he’s worthy of the duty of officiating a World Series (where consistency and accuracy on calls are never more important), those are not great numbers.

Take an April 24 game between the Philadelphia Phillies and the Milwaukee Brewers as a prime one-game example of how bad this guy can be. According to Umpire Scorecards' Twitter page, Hernández missed 16 balls and strikes calls. That itself is bad enough, but when you look at the particularly insightful data provided from that game alone, the numbers show he did even worse on that night than those numbers would suggest.

The last horrendous call of the game came in the bottom of the ninth, when Phillies outfielder Kyle Schwarber (who has a reputation of being one of the best hitters in the league at identifying balls and strikes) struck out looking on a pitch that was low and outside, sending Schwarber into a justifiably epic rant of frustration that summed up how everyone was feeling about the way the game was officiated.

Umpire Angel Hernandez was the lowest rated umpire on the day, missing 19 calls for a correct percentage of 85.3%.

He rang up 6 batters on pitches that were outside the zone and called a strike to Jean Segura that missed inside by a season high 6.47 inches.#Brewers #Phillies pic.twitter.com/pmmt1ELJJ6

To put the final nail in the coffin of Hernández’s case, U.S. District Judge J. Paul Oetken highlighted that the MLB picked Alfonso Márquez, who is Mexican, to officiate the 2011 and 2015 World Series, again within the date range the lawsuit chose to focus on. Oetken noted that this was “a promotion that seemingly would not have been made were MLB discriminating on the basis of race or national identity.”

If you’re still not convinced that all of this is enough to prove that Hernández is a bad official, watch this video and all your doubts will be stilled.