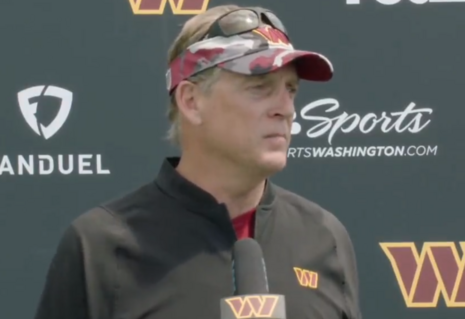 Del Rio made a comment regarding the January 6 “insurrection” ahead of the Democrat show trials, er, public hearings kicking off this week -- calling it a “dustup,” while also questioning why the riots of 2020 were not given nearly the same amount of negative criticism by the media.

"I can look at images on the TV, people's livelihoods are being destroyed, businesses are being burned down, no problem. And then we have a dust up at the Capitol, nothing burned down, and we're going to make that a major deal." pic.twitter.com/99mF3uxUTD

This quote was a follow-up explanation for a tweet he sent on Monday, in which he replied to a report that attempted to explain what happened during that day.

Would love to understand “the whole story “ about why the summer of riots, looting, burning and the destruction of personal property is never discussed but this is ???#CommonSense

Now obviously, what happened on January 6 is nothing short of stupid, irresponsible, and detrimental in so many ways, and calling it a “dustup” minimizes the incident as unimportant. Anyone who decided to storm the nation's capital should be held responsible in whatever way their actions deserve.

But, Del Rio is hitting on a point that is worth noting: the riots of 2020 were not nearly criticized as widely as the January 6 riot.

Communities were burned to the ground, cities were in chaos, businesses were destroyed, people lost their lives, and neighbor was turned against neighbor, all in the name of “social justice.” But there was nothing just about what happened in those long and tortuous months, and yet the majority of media outlets maintained the riots were "mostly peaceful" and hailed these domestic terrorists as heroes because they championed a progressive-friendly cause.

Even though Del Rio was spot on with his reasoning (despite having less than ideal execution), several high profile figures were predictably displeased with Del Rio’s statements. One such individual was Virginia State Sen. Scott Surrovell, who represents the district where the Commanders are hoping to build a new stadium.

Surrovell shamed Del Rio for his opinions and used his political influence to threaten and stall the future development of the team.

The likely indifference & tolerance in the @NFL to Jack Del Rio's indifference to insurrection underscores the league's hypocrisy in blackballing @Kaepernick7 and also makes clear to me that we won't be seeing any more votes on stadium bills this year https://t.co/PLAw0OJvQ6

Gee, that’s not blackmailing at all.

As a result, Del Rio did issue an apology for his choice of words just to get back in the good graces of the politician. However, he did also say that he will not be completely silenced or ashamed for what he believes.

"I express myself as an American -- we have that ability. I love this country, and I believe what I believe, and I've said what I want to say,” Del Rio said. “Every now and then, there's some people that get offended by it.”