Protesting the national anthem seems to be a popular thing to do amongst famous San Francisco sports figures. 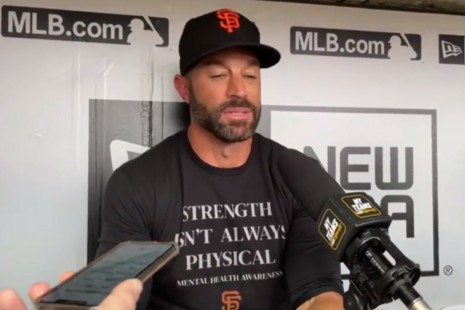 San Francisco Giants manager Gabe Kapler is taking a page out of Colin Kaepernick’s book and is using the national anthem as a way to protest until he feels that America is doing better as a country in the wake of the Robb Elementary school shooting in Uvalde, TX.

Kapler wrote a long entry on his personal blog in which he blamed America for allowing its citizens to be able to purchase guns, despite the fact that our Constitution allows for the ownership of guns as a means of self defense. He further placed a hefty amount of blame on politicians for not doing enough to change the reality of mass shootings.

“… we thoughtlessly link our moment of silence and grief with the equally thoughtless display of celebration for a country that refuses to take up the concept of controlling the sale of weapons used nearly exclusively for the mass slaughter of human beings. We have our moment (over and over), and then we move on without demanding real change from the people we empower to make these changes,” Kapler wrote.

He further incorrectly stated that mass shootings only happen in the U.S., and that standing for the national anthem glorifies the imperfections within our country.

“Every time I place my hand over my heart and remove my hat, I’m participating in a self congratulatory glorification of the ONLY country where these mass shootings take place,” Kapler said.

Kapler’s reasoning for not participating in the anthem is almost exactly the same as Kaepernick’s, only the cause is different.

"I am not going to stand up to show pride in a flag for a country that oppresses black people and people of color," Kaepernick said in an interview with NFL Media in 2016. "To me, this is bigger than football and it would be selfish on my part to look the other way.”

The fatal flaw in Kapler (and Kaepernick’s) reasoning is that he associates very real imperfections within a country with an excuse to not participate in one of the few things that unites Americans.

We all know that America is a country with lots of flaws, we have been since we won our independence in 1783. But our national anthem is one of the few instances where regardless of who we are or what walk of life we come from, we all generally want what’s best for our country. Singing it is not a sign that we approve of what needs to be fixed, it’s the recognition that we have an opportunity to be united in a time when there is so little unity.

To be fair, Kapler did participate in the anthem on Memorial Day, but he plans to continue his stunt in the coming days and weeks. The more he does so, the more he ’ll be sowing seeds of disunity.