Abortions in Oklahoma were almost completely wiped out thanks to House Bill 4327, a bill that will only allow abortions if the child is a product of rape or incest (and confirmed by law enforcement) and if the pregnancy threatens the life of the mother. 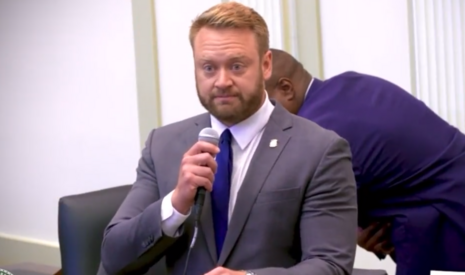 However, before the bill was signed on Thursday, State Rep. Mickey Dollens (D, Oklahoma City) took the house floor to say that he was touting a bill that he thought would be a better solution than banning abortions.

Sorry fellas, but it involves you and your ability to produce a baby.

Dollens thought it would be better to pass a bill that would require all Oklahoman males to get a vasectomy once they reach puberty.

HB4327 allows people to sue doctors for performing an abortion and defines life at the moment of “fertilization.” Here’s an idea: mandatory vasectomies - if signed into law would be the first Oklahoma statute to control the male reproductive system. No more unwanted pregnancies. pic.twitter.com/UnkJREpogZ

“I would invite you to co-author a bill that I’m considering next year that would mandate that each male, when they reach puberty, get a mandatory vasectomy that’s only reversible when they reach the point of financial and emotional stability,” Dollens said. “If you think that’s crazy, then I think that maybe you understand how 50% of Oklahomans feel, as well.” Dollens said he plans on drafting the bill next year.

Yes, that's about as ridiculous as it sounds. But Dollens is just showboating for the base.

It’s all just an emotional outburst a man who may or may not really believe abortion is healthcare and not murder. And by the way, the prolife bill was passed in a whopping 73-16 vote, which shows much stronger support than Dollens would let on.