The potential overturn of Roe v Wade as a national precedent has predictably drawn countless knee-jerk reactions from left-wing crazies who want to keep the practice of murdering babies going strong. 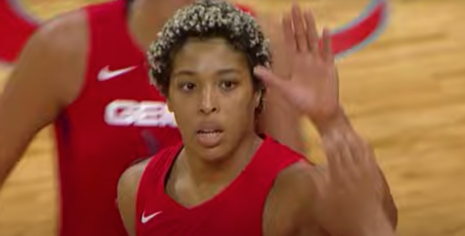 Some of these radicals are in the sports world in all the places you’d expect to find them: the WNBA, former Olympians … and of course, Billie Jean King.

In no way is it surprising that a league full of lesbians and hardcore feminists would be against anything that goes against “a woman’s right to choose,” and it is even less surprising that the WNBA is making it a priority to use their platform to advocate for voting for politicians that support abortion.

It might be effective too, if more than a handful of people had ever even seen a WNBA game.

Washington Mystics forward Tianna Hawkins echoed the WNBA’s statement, but provided an illogical, emotional argument for why it should stay in place.

“What if you want to conceive, and then the doctor says at early stages there is a deformity or something like that?,” Hawkins said. “You’re telling me if I want to save my child from struggling or pain and stuff like that, I have to bring him into this world and just let him suffer and die, and not do it early on?”

This is not a convincing argument for having an abortion. Yes, some babies are born with sicknesses that cause them immense pain throughout their life, but that is no excuse to end it before they are born. Human life is precious in all forms and should not be ended because a baby might be born with an illness.

Olympic bobsledder Elana Meyers Taylor said that she wondered how society might look if a law was passed that men would be ”financially responsible for a pregnant mom and child.”

Taylor is actually sitting at something important here. If a man is willing to have sex and potentially a child, he should be ready to step in and provide for the mom and kid (because that’s what men should do). However, the reality that abortions exist has created a cop-out strategy for men (and women) from having to accept responsibility for their decisions. Men should be responsible for their choices, but that does not mean abortions should stay legal in the meantime.

King provided your standard pro-abortion stance: it’s a woman’s right to choose what to do with her body, overturning Roe would eliminate that “right.”

A woman has had the right to make decisions for her body since #RoeVWade in 1973.

If Roe falls, millions of Americans would lose access to critical reproductive care.

It is vital that we do all we can to protect this legislation.

It’s no better and equally as ridiculous as “pastor” Rapael Warnock’s stance on why abortion should stay in place. It’s not a woman’s right to “choose” to kill a baby for convenience, it is murder cloaked as “healthcare.”

Don’t be surprised if more of this comes from athletes, especially female ones.