Sports have irrevocably gone woke, but every now and again you get a glimpse of what sports used to be: a platform used for inspiration and hope that brought people together. 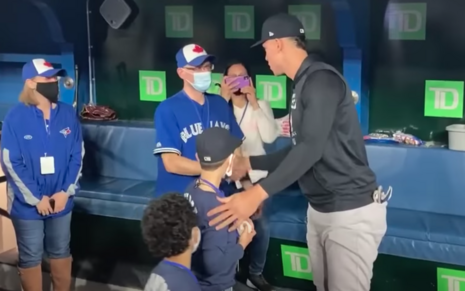 That was the case on Tuesday. New York Yankees Right Fielder Aaron Judge launched a home run to left field in the sixth inning of a game against the Toronto Blue Jays, and his ball ended in the hands of Toronto fan Mike Lanzillotta.

Most people would rightfully hold onto the souvenir, but Lanzillotta looked behind him and noticed 9-year-old Yankees fan Derek Rodriguez look longingly at the ball (Rodriguez was also wearing a Judge t-shirt). With almost no hesitation, Lanzillotta handed the young man the ball, prompting Rodriguez to tears.

A Blue Jays fan caught the Aaron Judge home run and proceeded to give the ball to a young Yankees fan.

The heartwarming interaction between the two fans culminated in both fans getting to meet Judge in the dugout before Wednesday's game, which was an equally uplifting moment. Lanzillotta once again read the situation well, allowing Rodriguez to soak in the experience with his hero and not dominating the conversation.

Tonight, Derek got to meet his favorite player 💙 pic.twitter.com/18b24wKYkv

Judge was more than happy to oblige the two, saying that he was also once a kid who would do anything to meet his favorite baseball players.

"I used to be in (Rodriguez's) position," Judge said. "Rooting on my favorite players and team ... so that was a pretty cool moment that I definitely won't forget."

This is what sports should be about.