Add MSNBC contributor and former Acting Solicitor General Neal Katyal to the list of unhinged progressives that think the potential overturn of Roe v Wade will be a bad thing. 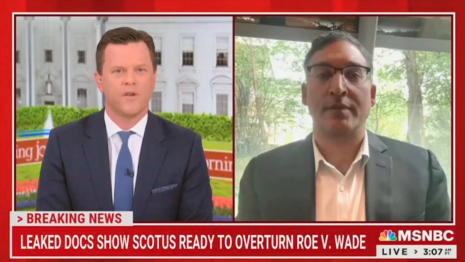 Katyal went on the network’s show Morning Joe to discuss the possibility that a legal ruling that has accounted for the deaths of over 62 million babies since its inception in 1973.

In fact, he literally said he wanted to cry when he discussed the possibility of it ending.

“I want to cry in so many different ways. This is as full-throated and muscular a decision as could ever be envisioned,” Katyal said. ”I think we all predicted Roe v. Wade was on thin ice. I think many thought it would be another year. I mean, for the last three years, I’ve been saying, once Justice [Amy Coney] Barrett got on the court, Roe’s days are numbered.”

Well, it’s supposed to be a muscular decision for a reason, and that reason is Roe enthroned the murdering of  babies as a "constitutional right" and must be changed. Anyone who does not wickedly suppress the truth that babies are human beings can see that what is hopefully going to happen in our country is the best thing in American politics … perhaps ever.

Obviously, the letter was a draft of the decision and nothing is final yet, but expect a lot more of leftist tears if this barbaric law is overruled.