Trump Wants To Start Hoops Team With LeBron ... If He Switches Genders 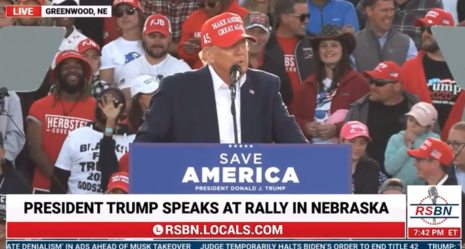 Speaking in front of thousands at a rally in Greenwood, NE (one of his many stops on his “Save America” rally tour), Trump jokingly hinted at his desire to start a basketball team. Naturally, he’d want only the best players to headline his hypothetical squad, so he offered self-proclaimed G.O.A.T LeBron James to jump on board.

The lone condition? LeBron would have to switch genders.

“I’ll say this to LeBron James who I don’t like very much. I’ll say, ‘LeBron, did you ever have thoughts about going woman? Because if you did I’d love to have you on my basketball team.’” - President Trump 🇺🇸#TrumpRally pic.twitter.com/05Gy4j1XO7

The proposal, while ridiculous, could have a decent chance at actually happening if both guys tried hard enough.

After all, LeBron does know a thing or two about switching his situation to make himself happy. The man literally just says the word and he ends up going to whatever team he thinks will win him a championship the fastest. And with how popular switching genders is these days, it’s not entirely outlandish to think LeBron would do it if he thought he could bolster his legacy by doing so. Plus, he acts like a diva so he’s halfway there already.

However, the long-standing beef between the two celebrities would probably put a damper on that ever happening, along with the fact that Trump would never start a basketball team. But it would be funny if it happened!