Stephen Colbert’s reaction to the potential overturn of Roe v Wade was everything you’d expect from The Late Show host: emotional, unhinged, and mostly incorrect. 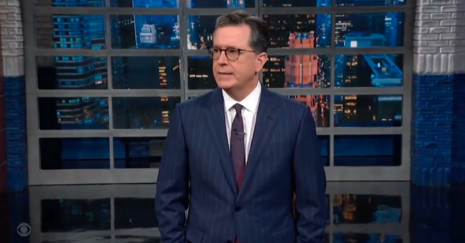 Colbert -- a devout Catholic of the Biden/Pelosi persuasion -- went on a nearly 10-minute rant at the opening of his show to berate SCOTUS' decision to potentially allow for babies to be born with no threat of being killed in the womb.

“Well, s—t,” Colbert said on his Tuesday show, lamenting the fact that he would no longer be able to focus on the 2022 Met Gala and would instead have to talk about, "Another group of out of touch people in crazy outfits pretending like it's 1895 - the Supreme Court.”

Here’s part of his rant. Fair-warning, it’s a doozy:

The most interesting aspect of Colbert’s rant is when he says that the justices who want to overturn Roe affirmed in their conformation hearings that the ruling was a precedent set by previous justices of the Supreme Court. Colbert pretends to believe acknowledging it was precedent equates supporting the ruling. But agreeing that something is a precedent and actually wanting to uphold that precedent are two different things, and the justices are more than within their purview to look at a precedent and overturn that precedent if it is wrong. Colbert almost certainly knows that, but why let reason get in the way of a good performative rage?

Get used to it. Colbert and a lot of his friends are going to have the same reaction if Roe gets overturned.