For every bill that's passed to protect women’s sports from being infiltrated by transgendered women, it seems like there is a sports team that will use its influence to promote the LGTBQIA+ agenda. 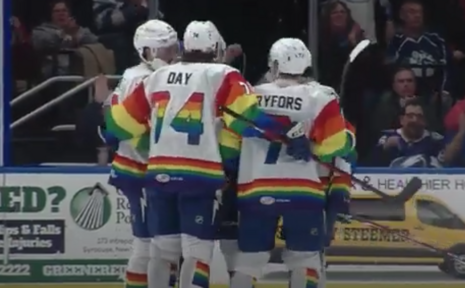 The Syracuse Crunch, the American Hockey League (AHL) affiliate of the Tampa Bay Lightning, hosted their annual pride night this past weekend in which the team wore rainbow-themed jerseys for the game while also selling a variety of pride-themed merchandise.

Furthermore, a young man by the name of Tyler Johnson, who came out as gay in 2019 and currently works “to ensure the LGBTQ+ community has equal opportunities and feels comfortable and accepted in any environment,” performed the ceremonial puck drop before the game started (the Crunch beat the Laval Rocket 5-1).

Hooray for social justice and inclusivity, since we all know that’s what makes this country and world better!

Members of the LGTBQIA+ community consistently say that all they want is to be accepted for who they are and be given chances to operate as equal members of society. But oftentimes, that’s not really the end goal of a majority of people in this demographic.

Frequently, the end goal is to make people completely bow down to their ideology and to ridicule people who dare to disagree with it even at a basic level. “Feeling comfortable and accepted in any environment” usually means having complete power over the thoughts and attitudes of those around them, almost to the point where anyone who does not identify with as LGTBQIA+ is viewed as a person whose heart and mind are filled with hatred and bigotry. Just look at our educational system for another example of how this plays out!

Why are we using our sports teams to promote his ideology?

In reality, we shouldn’t be, not at the minor league hockey level or anywhere else in sports.