San Diego Padres third baseman Manny Machado is known more for being a wizard on defense than being outspoken politically, but that changed on Wednesday when he spoke with local San Diego news outlet KUSI News. 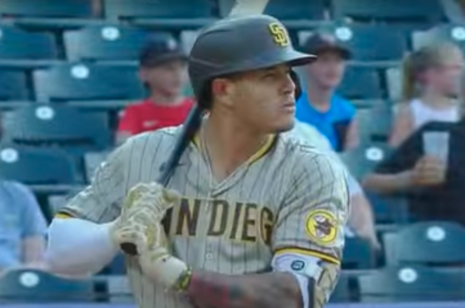 Machado took some time away from prepping for the season to conduct interviews, showing up to the media hits with a “Let’s Go Brandon” t-shirt. One reporter noted that because Machado decided to get political, his chances of getting in the baseball Hall of Fame might have dwindled significantly.

Manny Machado was a guaranteed First Ballot Hall of Famer to Cooperstown, and now the disgusting communist baseball writers will punish him one day for wearing a Let's Go Brandon shirt.

I stand with Manny, he will always be a Hall of Famer in my book! pic.twitter.com/D0vGdhoO2h

The reasons for why he chose to wear a shirt with the popular conservative catchphrase were unclear, but it is safe to say that the Miami native just made himself incredibly popular with those on the right.

Machado is not the only celebrity to have unashamedly used his platform to chant the popular phrase. Just four days ago, country music artist Kid Rock initiated a Let’s Go Brandon cheer at a bar in Nashville, much to the delight of the crowd.