Chocolate bar maker Mars, Inc., is definitely embracing the creepiness of the Halloween season. In their latest Twix ad – which hardly has anything to do with chocolate – the candy company featured a short story about a cross-dressing six-year-old, with the intent to promote more transgenderism and gender-fluid nonsense.

In the ad, which is Halloween-themed enough for the season, a little boy wearing a dress opens the door to welcome his babysitter for the evening. In festive fashion, the boy’s babysitter just so happens to be a witch.

He initially closes the door on her, telling her he doesn’t need a nanny, but as soon as he returns to playing on the living room floor, the witch materializes next to him, insisting that his parents hired her because he needs some supervision.

Considering the boy is wearing a purple dress, our spooky babysitter might be onto something.

Though, as the two-minute-long ad progresses it’s clear that the witch is a cool witch. She’s totally fine with the dress-wearing boy. They’re shown doing arts and crafts together, and they talk about their favorite colors. The witch’s favorite colors are black and “charcoal.”

As the ad continues, the ideological bent of the ad starts to come out more. Various kids in the cross-dressing boy’s neighborhood come up to him as he’s playing outside and inquire about his dress. One asks, “Why are you all dressed up?” and another observes, “It’s not Halloween yet.”

The boy just ignores them and walks back inside. I guess the impression we’re supposed to have is that these mean kids just don’t get it. He’s not wearing a Halloween costume, he’s wearing his preferred everyday, feminine identity.

As the boy runs inside, perturbed by the fact that his contemporaries don’t understand his truth, his newfound friend, the witch nanny, comes out on the porch and coldly hints that she may use her spells on the judgmental children. 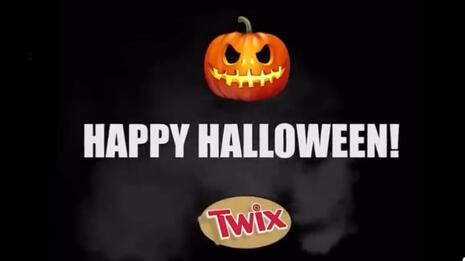 Oh, a veiled threat towards children who don’t get cross-dressing? Wow, what a great lesson this has become, Twix.

The messaging becomes even more overt as the cross-dressing boy runs into a slightly older boy while out playing at the park. The ad portrays the newcomer as a bully, intent on mocking the ad’s confused protagonist.

The older boy speaks aggressively to the male princess, saying, “You look like a girl.” Oh, hell no. He did not just go there! The now forlorn-looking cross-dressing child responds, saying, “Dressing like this makes me feel good.” (Does it, though?)

The bully then spots the nanny and remarks that she looks “weird.” He adds, “You both look weird.” And then he utters the most terrifying line we’ve ever heard: “Boys don’t wear dresses.”

By this point, the witch has begun manipulating the weather and the wind has started blowing furiously. She then blows away the young bully at what has to be at least 80 miles per hour – definitely enough to kill him.

And not one second of this Halloween Twix ad featured a candy bar. It just wants to hammer home the message to other kids that you better affirm gender-fluid kids or you might die.