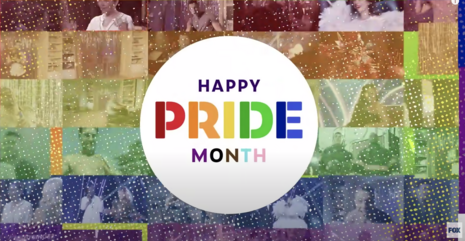 Pride month seems to be more like an obsession than a celebration this year with every media outlet, including those devoted to kids’ programming, pandering to the vegetable soup community.

The FOX TV network is the latest  to go all in on the pro-gay programming, releasing very flamboyant advertisements for Pride Month teasing the gayest moments of recent and upcoming seasons over some “rainbow-themed” original music.

FOX TV hit the Pride Month ground running, featuring an ad on June 1st dedicated to the festivities. FOX posted the ad to its Twitter account with the caption, “Happy Pride Month! Join me and my FOX Fam in celebrating the LGBTQIA+ community and achievements. #TVForAll.”

Basically the floodgates have been opened, and huge mainstream channels like FOX are now down with whatever the LGBTQIA+ activists say they need to be down with. Will they be marketing to kids with cartoons promoting puberty blockers next?

As far as the content of the ad went, FOX dredged up a bunch of pro-LGBTQ clips from its lineup and clipped them together over trendy pop music. It began with Call Me Kat star Leslie Jordan, a vivacious gay old man, wearing a rainbow sequin jacket, a bowtie and throwing rainbow confetti, while shouting “Happy Pride, y’all.” Yeah, charming.

In addition to featuring Jordan’s campiest moments on TV, FOX’s ad showcased gay-centric clips from shows like The Masked Singer, 9-1-1 Lone Star, The Great North and even The Simpsons. Did you ever think you’d see Smithers kiss Mr. Burns? Well, that was in the clip, and we were pretty weirded out.

The song choice for the ad was even more obnoxious. FOX TV used the song “Little Bit of Color” by artist “Indecisive Decisions” to add the whole rainbow/Pride theme. Lyrics throughout the ad sang out, “Once you taste my rainbow, everyday’s summer.” They also sang, “Ring my bell and we can get together. Why just paint with one pastel, when you could have ‘em all?”

The ad then concluded in a fury of confetti, and a message written by the FOX team, which said, “FOX is beaming with pride.” They also added “Happy Pride Month!” Yeah sure, “Happy Pride Month, “y’all.” Of course, this is how the media changes the culture. According to a recent Gallup poll, now 55% of Republicans supposedly support the LGBTQ agenda.

Mainstream networks like FOX are clearly successful with the agenda, even among the more conservative party in the United States. People need to be careful, lest 55% of Republicans soon become OK with transgender women being allowed on girls’ sports teams. And already it seems like some of us are OK with that. Let’s slow it way down, please.