Rosie O’Donnell: Americans Will ‘Take Out’ Trump in a 2020 ‘Landslide’

Rosie (Fire Can’t Melt Steel) O’Donnell is back at milking her anti-Trump brand again. In a recent podcast interview with stand-up comic Marc Maron, O’Donnell insisted that the president will not be sitting in the oval office this time next year because he will lose the upcoming election in a “landslide.” 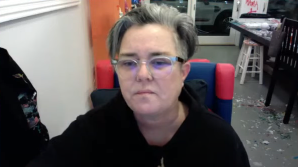 Who knows? Maybe this time she’ll get it right.

During an episode of WTF With Marc Maron, O’Donnell and the comedian of course couldn’t avoid the topic of Trump. Maron began by admitting that Trump may have actually killed his faith in humanity. He told Rosie, “You know what we're finding out in terms of this guy as president... is I don't know if I can believe if people are fundamentally good. Do you?” Gee, that’s dramatic. So Maron worked for years in the same town as Harvey Weinstein but it took Trump to sour him on humanity?

Rosie replied that she still had her hope in the goodness of people. After all, how else is Trump going to get voted out of office? “I do, I do believe that. I have to believe it,” the former View host said, adding, “I think November we're gonna be a landslide and take him out, that's what I have to believe.”

Can you believe these are the stakes for these people? If Americans choose the person Rosie O’Donnell doesn’t like, humanity -- no -- reality doesn’t make sense anymore. How selfish is that?

Still, O’Donnell reassured Maron that people “will rise to the occasion and vote him out. That's what I hope." But do you really, Rosie? Trump’s your bread and butter.

Of course, Rosie and Trump’s feud has gone on for years and will continue to, but she revealed to Maron that she’s only met the real estate mogul-turned-president twice. “Once at his wedding” and “then I met him once at the Survivor finale," she claimed, clarifying that she was a good friend of Marla Maples and was invited to her wedding to Trump.

Rosie then turned her ire on Mark Burnett, the creator and producer of Survivor who then went on to produce The Apprentice with Donald Trump back in the early 2000s. Rosie knew Burnett from her time as host during the Survivor finale. She told Maron, “I blame Mark Burnett for the vast majority of the problems this nation has, coming to terms with who he is in actuality. I feel Mark Burnett is directly, personally responsible.”

Rosie blasted the producer for creating “this image” of Trump that is “nothing like who he is, that is devoid of all facts about his essence and his character.” She admitted she couldn’t stand that Burnett had made Trump out to be a success, telling the host that Trump “didn't even have a boardroom before Mark Burnett and it was all plywood to begin with.”

If that’s the case, it sounds like Trump nailed the American Dream. Rosie just sounds jealous.