Just when you think the liberal media is about to give a fair nod to a conservative, they follow it up with any “negative” ammunition they can find. But let’s face it, complimenting a conservative is a very small space on their wheel of tolerance. 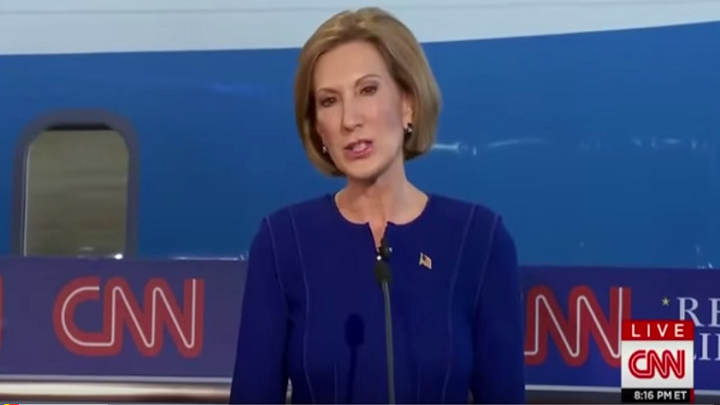 According to the Washington Post, Fiorina has been dubbed the champion of anti-abortion movement. Unfortunately, the well-deserved praise is offered with a big rock of salt. Despite the fitting title, the left still refuse to give up their “gold mine” with the statements Fiorina made at the last CNN Presidential Debates.

At the debates, Fiorina made obvious her passion and purposeful stance against Planned Parenthood and abortion and detailed:

“As regards Planned Parenthood, anyone who has watched this videotape, I dare Hillary Clinton, Barack Obama to watch these videos these tapes. Watch a fully formed fetus on the table, its heart beating, its legs kicking, while someone says we have to keep it alive to harvest its brain."

After praising Fiorina for being a “fresh voice” in the abortion debate, Philip Rucker of the Washington Post quickly turned to Fiorina’s flaws and wrote:

Addressing Fiorina’s rising profile on the issue of abortion, Stech said, ‘She may be a welcome voice and face to carry this water for the Republican Party, but she’s doing it with a bag of falsehoods and lies that have been called out by every fact checker, and that’s simply not progress for women.’

Eric Ferrero, vice president for communications at the Planned Parenthood Action Fund, said Monday in a statement: ‘There is no polite way to say this: Carly Fiorina is lying. There is no video showing anything like what she claims. It’s just totally false, no matter how many times she repeats it.’

Except she’s not lying. The video she described exists. If differs from the CMP-shot hidden camera footage, but it exists and Fiorina saw it. She has stood unwavering behind her statements. “On NBC’s ‘Meet the Press’ last Sunday, Fiorina said the videos reveal a ‘hideous reality’ that ‘goes to the character of our nation.’ She said: ‘Planned Parenthood is aborting fetuses alive to harvest their brains and other body parts. That is a fact.’”

Fiorina even called out the media for failing in their reporting roles when she said:

"In fact, that's what the mainstream media keeps talking about is the tapes and their origin. Rest assured, I have seen the images that I talked about last night. Rest assured that human lives are being aborted, fully formed, in order to harvest body parts.”

The left will most likely continue to squeeze out every possible ounce of “Fiorina has been proved wrong” with her Planned Parenthood statements, but her resolute stance on the issue of abortion has proven she can take the heat when she is in the line of fire.