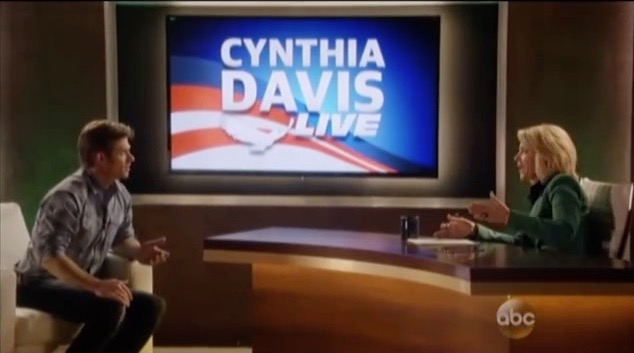 As promised during last week’s episode of ABC's Nashville, gay country star Will Lexington finally got his showdown with the show’s conservative caricature, leading straw-woman: Cynthia Davis. And as you probably guessed, Davis wasn’t portrayed kindly in the episode "Maybe You'll Appreciate Me Someday." Instead, the “conservative” talker is portrayed as a bloviating, incompetent homophobe who can’t string a coherent thought together to save her life.

Davis is also a coward, at first refusing to interview the man she lambasted for not making public appearances just one episode ago. She only relents when he stages a concert outside her studio. (Side note: it’s impressive that Will Lexington was able to muster so many fans when Nashville has repeatedly depicted country fans as homophobic bigots who would never listen to a gay artist’s music.)

It’s intriguing that the fictional Davis would try to “no platform” Will Lexington. Denying your ideological opponents a platform to share their opinions is a hallmark of the left, not the right. Liberal activists routinely shout down conservative guest speakers, and occasionally even turn on their own. Last August, Bernie Sanders’ microphone was seized by Black Lives Matter activists who quickly derailed his scheduled event. When Davis finally relents, she demands Will appear immediately, with no preparation, or not at all. As you’ll see in the next scene, it’s clear she didn’t expect him to accept her offer.

As expected, the “conservative” host, Cynthia Davis, has no coherent arguments. She just hates Will Lexington, and she’s terrified of him. Davis is the embodiment of liberal caricatures of conservative pundits, throwing a spaghetti of buzz words and sentence fragments at Lexington hoping to God something will stick for her audience. She’s also a bully who drove Lexington into advocacy when all he wanted to do was make music.

After valiantly slaying their straw-woman, Nashville’s writers shifted their focus to a far more realistic storyline. In October, 2014, real world pop star, Kesha, filed a lawsuit against her producer, Luke Gottwald, whom she accuses of taking her virginity by drugging and raping her. The case made headlines again last month when a judge refused to release Kesha from her contract with Sony over Gottwald’s alleged misconduct.

A nearly identical scene plays out in, “Maybe Someday You’ll Appreciate Me” with 16 year-old rising star, Maddie Conrad (Lennon Stella). Fortunately, Maddie’s father arrives just in time to break things up. Maddie’s mother wasn’t so lucky. In a last ditch effort to warn her daughter, Rayna recounts her own experience with the same producer in an open letter.

Accusations of sexual impropriety in entertainment are nothing new. Bill Cosby, once beloved, is now mired in legal battles and has admitted to drugging women and paying off victims. Elijah Wood has said child sexual exploitation is rampant in Hollywood, on par with the crimes of the BBC’s Jimmy Savile, a serial pedophile who assaulted as many as 500 or more girls and boys. Perhaps Hollywood studios should focus more on cleaning up their own houses before building more straw-men to bravely knock down.

Will: Hi. I appreciate you having me on.

Cynthia: Are we ready or what? What's going on?

Cynthia: With me tonight is someone who has been aggressively insinuating himself onto your television screens. I'm Cynthia Davis. Buckle up as I take on Will Lexington and the domestic terrorism of his homosexual agenda. …

Cynthia: It's an attack not only on religious liberty, but on all the heterosexual citizens of this country.

Will: Oh, me singing songs does all that?

Cynthia: Oh, activist lawmakers will see to it that we are found guilty of a hate crime for rejecting a lifestyle that is historically, I mean, biblically and physically is just wrong. You brainwash our youth; you pervert our laws in order to destroy the sanctity of marriage!

Will: You're scared, aren't you?

Will: That's why you didn't want me on your show.

Will: That's why you won't let me speak now.

Cynthia: You know what? I don't know what you're trying to get at here, but this really –

Will: If you're not afraid, then let me speak.

Will: You don't want your audience to see me or hear me. You know why?

Will: Because they might recognize me. Not as Will Lexington, gay country singer, but as their brother or their cousin or their friend or their coworker.

Cynthia: Oh, are you finished?

Will: No. No, look. I know people who feed on your brand of intolerance. I was raised on it myself. But people's minds change when you stop being afraid. I'm a human being. I'm a good man, a good son. There's nothing to be scared of here.

Rayna (voiceover): Dear Maddie, I want to tell you a story about something that happened to me a long time ago. I started working with a music producer when I was just about your age, and now you're working with that same producer. I never want you to feel the way I felt then -- naive and responsible for what happened, because I wasn't. He was. "No young woman should have to feel pressured or shamed or tricked into a sexual situation by any man, especially the ones we're supposed to trust." …

Maddie: Um, I actually -- I think I should go upstairs.

Producer: Whoa. What's going on? I mean...shoot. We were just starting to open up to each other.

Producer: Hey. Come on. Sweetheart, you were all about cozying up to me for a selfie yesterday. Then you came to my party. And now suddenly you're not interested?

Producer: Wow. I, uh, I must've misunderstood. See, I thought you wanted to be a grown-up and have a real, grown-up career.

Maddie: If this is what it takes to have a career, then I don't want one.

Prodcuer: All right, sweetheart. Here. Have a drink. All right? There you go. Take it. There you go. Hey. Listen, if you want to be an artist -- I mean, a real artist...

Producer: Who is that?

Deacon: Baby. You okay? You all right?

Deacon: He do anything to you?

Deacon: You touch my daughter?

Deacon: "Nothing happened." What about my wife? Anything happen there?

Producer: I don't know what you're talking about.