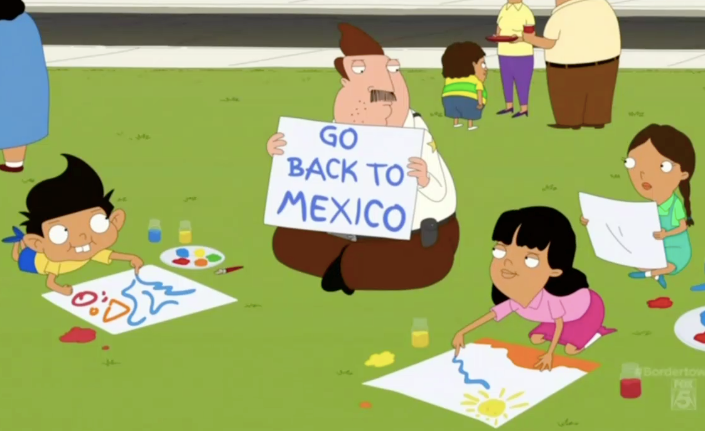 FOX’s new animated comedy from executive producer Seth MacFarlane, Bordertown, spared no individual, group, or social cause in its debut episode last night, "The Engagement." The show, set on the US/Mexico border in the fictional town of Mexifornia, hops neatly from one stereotype to the next, apparently out to offend every conceivable person. The premiere centers around an interracial marriage proposal and a town referendum on a new immigration law.

Bordertown star, Bud Buckwald (Hank Azaria) is a comically ineffective, woefully out of shape, redneck, American Border Patrol agent who acts racist and wants to exile “the gays” once he gets rid of all immigrants:

Becky: Dad, how can you support that horrible law? If you get rid of all the immigrants, who's next?

Bud: Let's cross that gay bridge when we come to it, huh?

Janice: Oh, your father's just upset because a lot of our immigrant neighbors are doing better than us. He told me so in private. I didn't want to say anything, but my lips just started moving, and I couldn't seem to stop them. See, they're still going now!

Becky: Dad, who cares if immigrants are doing better than us? They work hard. They deserve it.

Bud: I care! I used to be someone in this town. My dad owned the biggest flower shop on the strip, right across from the freeway. All you had to do was pull off the exit, park your car, buy some flowers. Couldn't get more convenient. And then Alejandro changed the game...

His younger daughter, Gert (Missi Pyle), is a caricature of Honey Boo Boo, an overweight child pageant queen who shares a trough with her pot-bellied sidekick, Sparkles. His older daughter, Becky (Alex Borstein), is in love with J.C. (Nicholas Gonzalez), the American-born son of Bud’s Mexican neighbors who returns from college fully steeped in Social Justice Warrior grievance-mongering. When Becky hears J.C. is coming home from college, she exclaims, “I’d bake a cake if that didn’t reinforce gender roles and prop up Big Gluten.”

J.C. refuses to work “until all the problems of the world are solved,” quipping, “How can I get a job when monsters are trying to pass this immigration law?” His activism is repeatedly lampooned throughout the episode, from his mother’s board listing his sole accomplishment, “Lone Man at Sit In Sat On” to his proclamation that “I’ve never been so happy to be heteronormative” when Becky accepts his marriage proposal. J.C. is later pulled over and deported to Mexico (via the Deportation Cannon!) after correctly naming last year’s WNBA champion, because “no American would know that.”

In Mexico, J.C. is beaten and robbed by the Virgin Mary for “not believing in me,” while back in the states, Becky begs him to “put a baby in me so I can fight for the right to legally abort it,” and he pledges not to get married before the country is renamed "the United States of Indigenous Rape." Meanwhile, Bud encouraged Becky at age 14 to trick a guy into getting her pregnant, even giving her a condom-pricking push pin for her birthday, and turns his wife down when she wants to give him a "very special reward" for saving the day, saying, "I've already been in one hellhole tonight." There’s plenty more I could list, but I think you get the picture.

The only real question is how long Bordertown can keep up this shtick. The pilot was shock and awe; it will be interesting to watch the show’s writers try to remain relevant in the coming weeks.