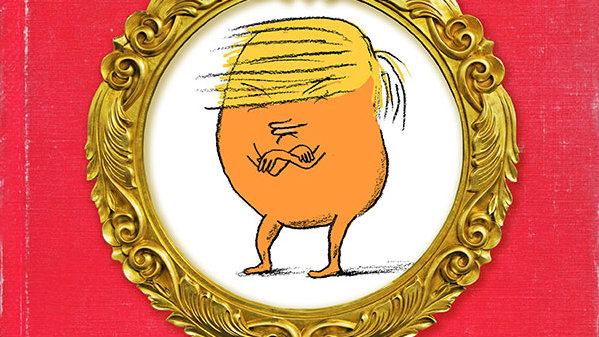 Dehumanizing people only works one way for leftists.

Michael Ian Black’s new children’s book, A Child’s First Book of Trump, explains the “wild” “beasties,” called the Trumps, to our “youngest citizens,” according to its satirical description. USA Today notes that while the book is supposedly for the youngest citizens, “Older citizens might need a primer too.”

The book’s cover features a nude Dr. Seuss-esque Trump creature. Don’t worry, parents; none of his private parts are showing. The book includes jokes about his “underdeveloped” hands. If your kids don’t get the humor, just point them to the cover illustration.

The USA Today review is nothing but apologetic. The author Maria Puente calls the book “clever and gently amusing — far gentler than anything Trump has said about … just about everybody.” Translation: At least this book isn’t as vulgar or derogatory as Trump.

Since when did Trump become the moral standard for appropriate children’s books?

Puente also points out that Trump isn’t alone being the subject of new children’s books. Hillary has her own books by Jonah Winter and Michelle Markel.

Is there a children’s book about “crooked Hillary” which indoctrinates children with Trump’s talking points and depicts a nude Hillary on the cover?

No! Of course not.

Jonah Winter’s book likens Hillary to Queen Elizabeth I (minus the mass murder of Catholics part), Joan of Ark, and Rosie the Riveter.

That’s okay because dehumanizing people only works one way for leftists. Cher can advertise Black’s book on Twitter, saying, “WHEN U KNOW THERES A HORRIBLE,UGLY (sic) MONSTER OUT THERE,BUT (sic) U NEED A BOOK.. 2HELP U,“NOT” SCARE THE kiddies.”

No one will blame Cher or Black for the violence of anti-Trump protestors. The victims of the protest were asking for it.